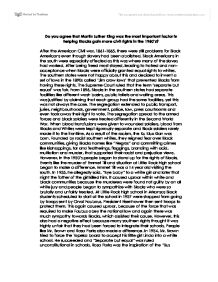 Do you agree that Martin Luther King was the most important factor in helping Blacks gain more civil rights in the 1960's? After the American Civil war, 1861-1865, there were still problems for Black Americans even though slavery had been abolished. Black Americans in the south were especially affected as this was where many of the slaves had worked. After being freed most stayed, leading to hatred and non-acceptance when Blacks were officially granted equal rights to whites. The southern states were not happy about this and decided to invent a set of laws in the 1890s called 'Jim crow laws' that prevented Blacks from having these rights. The Supreme Court ruled that the term 'separate but equal' was fair. From 1896, Blacks in the southern states had separate facilities like different wash basins, public toilets and waiting areas. This was justified by claiming that each group had the same facilities, yet this was not always the case. The segregation extended to public transport, juries, neighbourhoods, government, police, law, press courtrooms and even took away their right to vote. The segregation spread to the armed forces and black soldiers were treated differently in the Second World War. When blood transfusions were given to wounded soldiers, blood from Blacks and Whites were kept rigorously separate and Black soldiers rarely made it to the frontline. As a result of the racism, the Ku Klux Klan was born. Founded by racist southern whites, they reigned fear over Black communities, giving Blacks names like "Negros" and committing crimes like kidnappings, tar and featherings, floggings, branding with acid, mutilation and murder, that supported their racist and prejudice views. However, in the 1950's people began to stand up for the rights of Blacks. Events like the murder of Emmet Till and situation at Little Rock high school began to make a difference. Emmet Till was a 14 year old visiting the south. ...read more.

Both the actions of these men were directly responsible for, not initiating but allowing the change that so many other people had put effort into achieving. President Kennedy, although proposing the Civil rights act, was thought to be lukewarm towards the Civil rights movement and many activists criticized him for his inadequacy. However, after his death came Lyndon B. Johnson. He successfully passed the Civil rights Act of 1964 outlawing most segregation and a second bill allowing Blacks from the south a chance to vote. He also arrested four Ku Klux Klan members in connection to the death of a social worker and condemned the organisation publically. Johnson was just as important as King because if it weren't for his actions, despite being largely opposed by Whites from the South, then segregation and inequality wouldn't have been made illegal and Kings protests would have been in vain. There were also White people who had an unintentional impact on civil rights, who despite originally being against the movement had a positive effect. On 7th of March 1965, Sheriff Jim Clark attracted the attention of the U.S. press when he brutally unleashed his men on hundreds of peaceful marchers on a protest march from Selma to The capital of Montgomery. Captured on national television, America watched on as the Sheriff beat and tear gassed the innocent crowd and many people reprimanded his actions. Eugene 'Bull' Connor was also a part of a similar incident. He became a symbol for the fight against integration for using fire hoses and police attack dogs against unarmed, non-violent protest marchers. This spectacle was again broadcasted on national television. These events served as one of the catalysts for major social and legal change in the south and helped to ensure the civil rights act of 1964. Therefore, Connors tactics helped to bring about the very change he was opposing. Governor George Wallace also provoked the rage and sympathy of white and blacks through a number of ways. ...read more.

Despite all the other activists who had a positive effect on the Civil rights movement I think that Martin Luther King's techniques and ideas were the most effective and most largely contributed to the changes made in 1964 and 1965. This is because I think his ideas were more accessible to blacks and whites as it favoured peace rather than violence against whites. It wasn't strictly religious but used religious ideas like non-violence whilst organisations like the black Muslims may have put non believers off. Not only that but its views were not extreme, therefore becoming more accessible to all Americans. However I don't think that racism was eliminated completely by his actions because of the riots in over 60 different cities following his assassination. Even today racism is still a rather prominent problem. The case of Rodney King raised public outrage, which was a brutal incident thought to have been racially motivated. Rodney King, a black motorist, beaten with batons, whilst being filmed by a bystander, by four white policemen in Los Angeles in 1991 when he resisted arrest following a high-speed car chase. This event increased tensions between the black community of LA and the LAPD and also sparked issues like police brutality, unemployment and poverty within black communities. Later in 1992, the policemen were charged, but found not guilty by a predominantly white jury. This led to the Los Angeles riots of 1992 where 53 people were killed in criminal acts such as arson, looting, assault and murder which lasted for over six days. After the riots, pressure mounted for a retrial of the four policemen and the final verdict was reached in 1993, nearly a year after the riots. Two of the four policemen were convicted. The fact that an event so racially motivated, violent and fatal could have happened so long after the civil rights act shows that racism is still engrained in society and although King succeeded in playing one of the most important roles in making equality law, it takes more than the law to change the way people think. ...read more.