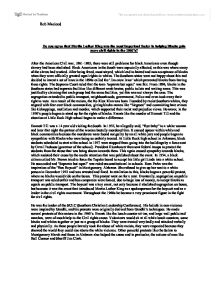 Do you agree that Martin Luther King was the most important factor in helping Blacks gain more civil rights in the 1960's? After the American Civil war, 1861-1865, there were still problems for black Americans even though slavery had been abolished. Black Americans in the South were especially affected, as this was where many of the slaves had worked. After being freed, most stayed, which lead to hatred and non-acceptance of blacks when they were officially granted equal rights to whites. The Southern states were not happy about this and decided to invent a set of laws in the 1890s called the 'Jim crow laws' which prevented blacks from having these rights. The Supreme Court ruled that the term 'separate but equal' was fair. From 1896, blacks in the Southern states had separate facilities like different wash basins, public toilets and waiting areas. This was justified by claiming that each group had the same facilities, yet this was not always the case. The segregation extended to public transport, neighbourhoods, government, Police and even took away their right to vote. As a result of the racism, the Ku Klux Klan was born. Founded by racist Southern whites, they reigned with fear over black communities, giving blacks names like "Negroes" and committing hate crimes like kidnappings, mutilation and murder, which supported their racist and prejudice views. ...read more.

The anger at his assassination, the riots, and the fact his death was nationally recognised, shows that he was a greatly admired member of society and would not be forgotten in the future. However, there is a lot of evidence that doesn't support the view that King was the most important factor. For example there were many other Black civil rights activists on the scene as well as King in the 1960s, all that arguably had a positive effect on Black civil rights. In 1961, a group of young white and black volunteers mainly involved in the two organizations called CORE (Congress of Racial Equality) and SNCC (Student Non-violent Coordinating Committee), organized a "Freedom ride" on interstate buses to test the Court's decision about the segregation on transport. Non-violent protests were effective because they portrayed the black and white peaceful protesters in a much better light than the angry anti-racist mobs. However, there were some black protesters who were dissatisfied with the rate of change and believed that peace could only get them so far, and favoured violence if necessary. The Black Muslims founded in 1930, were lead by Elijah Muhammad and had a strict Islamic code of behaviour. They strongly believed that blacks were better than whites and disagreed with the idea of integration, favouring the idea of having a place for just black people. ...read more.

However I don't think that racism was eliminated completely by his actions because of the riots in over 60 different cities following his assassination. Even today racism is still a rather prominent problem. The case of Rodney King raised public outrage, which was a brutal incident thought to have been racially motivated. Rodney King, a black motorist, was filmed by a bystander being beaten with batons by four white policemen in Los Angeles in 1991, when he resisted arrest following a high-speed car chase. The event increased tensions between the black community of LA and the LAPD. Later in 1992, the policemen were charged, but found not guilty by a predominantly white jury. This led to the Los Angeles riots of 1992 where 53 people were killed in criminal acts such as arson, looting, assault and murder which lasted for over six days. After the riots, pressure mounted for a retrial of the four policemen and the final verdict was reached in 1993, nearly a year after the riots. Two of the four policemen were convicted. The fact that an event so racially motivated and violent could have happened so long after the civil rights act, shows that racism is still ingrained in society and although King succeeded in playing one of the most important roles in making equality the law, it takes more than the law to change the way people think. Rob Macleod ...read more.