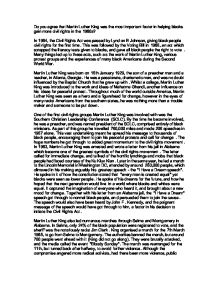 Do you agree that Martin Luther King was the most important factor in helping blacks gain more civil rights in the 1960s?

Do you agree that Martin Luther King was the most important factor in helping blacks gain more civil rights in the 1960s? In 1964, the Civil Rights Act was passed by Lyndon B Johnson, giving black people civil rights for the first time. This was followed by the Voting Bill in 1965, an act which scrapped the literacy tests given to blacks, and gave all black people the right to vote. Many things led up to these acts, such as the work of Martin Luther King, various protest groups and the experiences of many black Americans during the Second World War. Martin Luther King was born on 15th January 1929, the son of a preacher man and a teacher, in Atlanta, Georgia. He was a passionate, charismatic man, and was no doubt influenced by the Baptist Church that he grew up with. Whilst a college, Martin Luther King was introduced to the work and ideas of Mahatma Ghandi, another influence on his ideas for peaceful protest. Throughout much of the world outside America, Martin Luther King was seen as a hero and a figurehead for change, however in the eyes of many racist Americans from the southern states, he was nothing more than a trouble maker and someone to be put down. ...read more.

Without him, the more extreme groups would have taken over, and their violent campaign would have done more harm than good for black people. His calm protests caught the attention of those with sufficient power to make a difference, and he can be credited with having the greatest input for getting black people in America the right to vote, and other civil rights. He was not the only man working to get black people civil rights however - there were numerous other groups working to achieve the same thing. Before King's involvement, one of the best known groups was the Universal Negro Improvement Association - or the Back to Africa movement, led by Marcus Garvey. He felt that if black people could not be accepted in America, they should all return to their homeland of Africa, to live in equality, among other black people. Although many dismissed Garvey's ideas as fanciful, his slogans, like, "Black is beautiful" made people proud of their skin colour, and although he was arrested and deported, he was able to add to the growing feeling of belonging amongst the black community. A slightly less extreme group was the National Association for the Advancement of Coloured People, set up in the 1900s by Web DuBois. ...read more.

In conclusion, I think Martin Luther King was the most important factor in helping black gain more civil rights in the 1960s. He gave black people a leader to follow, and a feeling of togetherness within the black communtiy. The media, in most of the world, loved him, ensuring his support all round the world. He was the figurehead of the movement, a charismatic man capable of persuading presidents and many others that civil rights for blacks were important, and racism was wrong. However it is something he could not have done alone. One man could not have persuaded people that they didn't have to put up with racism, and things were different elsewhere, in the same way that World War Two did. If King has been the first to call for change, he would have had similar effects to the first groups, and been able to make a few changes, and make blacks feel united. He had no power over the laws either. The presidents' support was necessary for anything to become truly different. Overall with aid from the numerous black groups, and with the huge numbers of other protests, his brilliant oration and ability to be a forceful movement for change he was probably the most important factor in black people gaining more civil rights in the '60s ...read more.

This is a good essay that addresses several alternative interpretations but would benefit from more accurate and relevant factual evidence. The student responds very well to the question by addressing several factors that explain the advance of civil rights. By ...

This is a good essay that addresses several alternative interpretations but would benefit from more accurate and relevant factual evidence. The student responds very well to the question by addressing several factors that explain the advance of civil rights. By addressing the factor named in the question - Martin Luther King - first, the student is showing that they have enough knowledge to directly answer the question set. By then going on to address other factors - such as the Second World War - the student is showing they are thinking widely and are not being narrow minded and focusing on one particular interpretation. One minor improvement the student could make could be to add in words like 'However...' at the start of any new paragraph that introduces a new possible factor. This would reiterate to the examiner that the student is constantly thinking about the need to consider alternative interpretations.

This student clearly has strong factual knowledge of the events that led to black civil rights in the USA, and they use accurate knowledge, such as references to the Civil Rights Act, which shows that they have the knowledge to back up their statements rather than making assertions they can't prove. The student also makes good use of statistics, such as '...made 208 speeches in 1957 alone', which is good as it shows they have the depth of knowledge to see that this is a high number of speeches to make. This is better than saying something less specific such as 'he made a lot of speeches.' However, the student needs to be careful that they get their evidence as accurate as possible: for example, they refer to a 'Voting Bill of 1965', but it was actually called the Voting Rights Act, which is crucial because a Bill is a potential law that hasn't yet passed while an Act is one that has passed, so the examiner might be led to believe that this student isn't sure about what became law and what didn't. Also, at times the student uses too much evidence - for example, the references to Martin Luther King's biography (such as 'Martin Luther King was born on 15th January 1929') don't go towards explaining how he helped to achieve civil rights. A good rule to have is 'always use evidence, but only when it answers the question'.

The conclusion to the essay is excellent as it summarises the argument that has been made and directly answers the question - 'However it is something he could not have done alone'. This shows that the student has the ability to look back over what they have written and use their understanding to reach a judgement. The judgements throughout the essay are generally of a similar standard, but the student should be careful to avoid giving simple answers to what was a very complex problem: for example, 'they may have only listened to what he had to say in order to gain more votes' is good as it considers alternative interpretations, but supporting civil rights was not necessarily a vote winner and might have in fact been a vote loser because it was a very controversial idea at the time.

The spelling, grammar and punctuation in the essay is fairly strong, which is good as it means there is no confusion over what the student is trying to say, and the essay does not come across rushed. However, the student doesn't need to start each of the first few paragraphs with 'Martin Luther King was... Martin Luther King also...' - it is more convenient to say 'King was... King also...', and it saves time that the student could otherwise spend analysing.