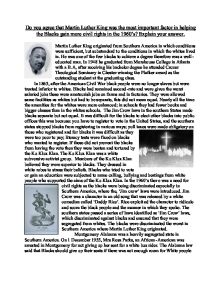 Do you agree that Martin Luther King was the most important factor in helping the Blacks gain more civil rights in the 1960's? Explain your answer.

Do you agree that Martin Luther King was the most important factor in helping the Blacks gain more civil rights in the 1960's? Explain your answer. Martin Luther King originated from Southern America in which conditions were sufficient, but substandard to the conditions in which the whites lived in. He was one of the few blacks to achieve a degree therefore was a well-educated man. In 1948 he graduated from Morehouse College in Atlanta with a B.A, after receiving his bachelor degree he attended Crozer Theological Seminary in Chester winning the Plafker award as the outstanding student at the graduating class. In 1865, after the American Civil War black people were no longer slaves but were treated inferior to whites. Blacks had remained second-rate and were given the worst salaried jobs these were amateurish jobs on farms and in factories. They were allowed same facilities as whites but had to be separate, this did not mean equal. Nearly all the time the amenities for the whites were more enhanced; in schools they had fewer books and bigger classes than in the whites schools. The Jim Crow laws in the southern States made blacks separate but not equal. It was difficult for the blacks to elect other blacks into public offices this was because: you have to register to vote in the United States, and the southern states stopped blacks from registering in various ways; poll taxes were made obligatory on those who ...read more.

In 1957, Black ministers formed the Southern Christian Leadership Conference and King was named the first president, giving blacks a leader however he was not the only black leader; Malcolm X was also a civil rights leader. The two differed greatly but reached the same point. King believed in non-violent protests influenced by Mahatma Ghandi however these campaigns led to more white violence e.g. four black children were shot by whites whilst attending Sunday School. The next campaign organised by Martin Luther King was the Birmingham campaign in 1963. Along with other black leaders Martin Luther King organised a new campaign to desegregate Birmingham in Alabama. This was one of the worst states for discrimination of the blacks. At least 30, 000 people were involved in the Birmingham campaign, including students and schoolchildren. On Good Friday King was arrested whilst leading the march through the centre of Birmingham. Many others involved in the marches were imprisoned and the jails of Birmingham were full. King organised the people and the campaigns, he chose the place to protest where he knew the chief police would react violently and notified the world press (TV and newspaper industry). He began to use the media to get more supporters to gain more civil rights, the more King used the media the more support he gained. This showed USA to be hypocrites at a time of the Cold War when the USA were said to be leaders of the free world but a joke to the blacks. ...read more.

Being a Christian he preached love for your enemy and the need for no violence in life. He never gave up when he received death threats and when his house was bombed, he put himself in danger proving to be a true leader. He was a symbol of hope and was respected. He made 208 speeches travelling 1,250,000 kilometres campaigning for black rights. His campaigns and speeches changed the hearts of white Americans towards black Americans. He was awarded the Nobel Prize as the world saw the way he changed the attitudes to whites through his love and character. He was given the Presidential Medal of Freedom; the Federal Government acknowledged his efforts of being the most important factor in contributing to gain more black civil rights. In 1973 a blacks was elected as Mayor of Los Angeles where only one in eights is black he pointed out that if it had not been for King there might have been a bloodbath in parts of America in the 1960's. Another man remarked: " A man with a conscience of his generation" Shaming America into the passing of civil rights for all Black people, through his gift of oratory; his great organizational skills which he used into inspiring others into accepting his message, his vision of freedom for all. He was the uncrowned leader of the Civil Rights Movement. He was an admiration, inspiration, elegance and father of four who motivated others for a just cause. ...read more.