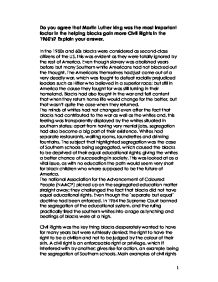 Do you agree that Martin Luther king was the most important factor in the helping blacks gain more Civil Rights in the 1960's? Explain your answer.

Do you agree that Martin Luther king was the most important factor in the helping blacks gain more Civil Rights in the 1960's? Explain your answer. In the 1950s and 60s blacks were considered as second-class citizens of the US, this was evident as they were totally ignored by the rest of America. Even though slavery was abolished years before but many Southern white Americans had not blacked out the thought. The Americans themselves had just come out of a very deadly war, which was fought to defeat racially prejudiced leaders such as Hitler who believed in a superior race; but still in America the cause they fought for was still lurking in their homeland. Blacks had also fought in the war and felt content that when they return home life would change for the better, but that wasn't quite the case when they returned. The minds of whites had not changed even after the fact that blacks had contributed to the war as well as the whites and, this feeling was transparently displayed by the whites situated in southern states; apart from having very menial jobs, segregation had also become a big part of their existence. Whites had separate restaurants, waiting rooms, laundrettes and drinking fountains. The subject that highlighted segregation was the case of Southern schools being segregated, which caused the blacks to be deprived of their equal educational rights; giving the whites a better chance of succeeding in society. ...read more.

In the manifesto they brought across the issue of sending telegrams to federal officials and called upon white southerners to "realize that the treatment of Negroes is a basic spiritual problem...far too many have silently stood by." They also encouraged black citizens to seek justice and reject all injustice, and to also dedicate himself or herself to the principle of non-violence. SCLC was very different in comparison to organizations such as: Student Nonviolent Coordinating Committee (SNCC) and the National Association for the Advancement of Coloured People (NAACP), rather than seeking individual membership, they coordinated activities carried out by organisations such as Montgomery Improvement Association(MIA) and SCLC movements. SCLC trained local communities about the philosophy of Christian non-violence, opened citizen schools, and registered voters. SCLC wanted to keep the struggle for civil rights within the lines of principled terms. Through the 1960s under the influence of King's leadership, SCLC involved themselves in sit-ins, voter registrations, mass demonstrations, Freedom rides and antipoverty programs. In November 1961 King learnt a great lesson when a demonstration in Albany, Georgia, known as the Albany Movement proved unsuccessful. As the protests and arrests did not gain the national attention King wanted and only a few changes made. Two years later King joined forces with Shuttlesworth and the Alabama Christian Movement for Human Rights (ACMHR). Together they organized mass protest campaigns in Birmingham. King considered the Birmingham demonstration as successful due to many adjustments being made. ...read more.

By 23 April forty-six people had died, 2,600 were injured, and more than 21,000 people were arrested. Militant black leaders took their chance and encouraged retaliation. "Black Power" promoter Carmichael advocated a violent struggle, as NAACP Executive Director Roy Wilkins countered that King would have been "outraged" by the disorders and that "millions of Negroes in this country" were opposed to the violence. Wilkins then announced a nationwide campaign against racial violence emphasizing jobs for the unemployed and better community relations. King was buried on the 9th April in Atlanta, thousands attended his funeral and it was broadcasted nationwide. In conclusion to this essay I refer back to the question given, do you agree that Martin Luther king was the most important factor in the helping blacks gain more Civil Rights in the 1960's? I agree to the question above as King's influence and aptitude gave blacks the rights they retain today, without the determination and desperation of this one man things would have changed as time slowly passed, or maybe never changed. King could be considered to have changed the face of America. King also proved to learn from little mistakes and bring about great change, he shrewdly used the media to gain stronger supporters as the treatment of blacks were portrayed for viewers. Although King knew that his enemies grew by the minute he still stood strong for his black people, and kept a cool head. His speech's such as the one in Washington, he seemed to attack the conscience of white citizens and kept up the theme of `ideal America`, could be compared to patriotism. 1 ...read more.