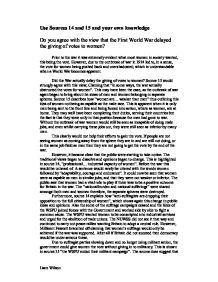 Do you agree with the view that the First World War delayed the giving of votes to women?

Use Sources 14 and 15 and your own knowledge Do you agree with the view that the First World War delayed the giving of votes to women? Prior to the war it was extremely evident what most women in society wanted, this being the vote. However, due to the out break of war in 1914 led to, in a sense, the vote for women being pushed back and overshadowed; which is understandable when a World War becomes apparent. Did the War actually delay the giving of votes to women? Source 15 would strongly agree with this view; Claming that "in some ways, the war actually obstructed the votes for women". This may have been the case, as the outbreak of war again began to bring about the ideas of men and women belonging in separate spheres. Source 15 describes how "women are... weaker than men" thus outlining this idea of women not being as capable as the male race. This is apparent when it is only men being sent to the front line and being forced into action, where as women, are at home. They may well have been completing their duties, serving their countries but the fact is that they were only in that position because the men had gone to war. Without the outbreak of war women would still be seen as incapable of doing male jobs, and even whilst carrying these jobs out, they were still seen as inferior by many men. ...read more.

This may have been the case. It could be argued that the government were seriously considering giving some women the vote before the outbreak of war. Asquith was the main man standing in the way but other parties and leaders could see benefits of allowing women to vote. Therefore, the war has seen the campaign fade away and the government may not have to worry about this after the war either, as campaigning wise the suffragists are almost back where they started. One example of suffragist support was the alliance the NUWSS created with the Labour Party which could have led to the vote by 1915. However, the war started thus putting pressure on the Liberal Government which led to talks with the NUWSS. Also, as stated earlier Millicent Fawcett broke away from the NUWSS and so it became divided. This obviously weakened them and slowed them down as many were now concentrating on the war effort. On the other hand, source 15 states that women were pushed down the "political agenda" but not completely away from the attention of the government. This in a sense agrees with source 14, "women's suffrage, of which everyone is conscious". The two are presented in different tones, however, both still suggest that women's suffrage is very much in the minds of the government and must eventually be addressed. ...read more.

Overall both sources share good arguments to whether the war delayed giving women the vote. The two sources have elements which seem to merge together to produce the final outcome. The war did change many people's views and countless women had proved their right to citizenship. Their cause was aided by things such as positive and sympathetic media cover and changes in government. It could be argued that the war helped a long battle between two forces to be stopped by something bigger than themselves. The war, whilst dragging on over a period of four years, appears to have sped up the giving of women the vote. On the other hand, women over the age of thirty only gained the vote, which could have caused much controversy. This was because most of the work, during the war, was carried out by much younger women. It was said that women over thirty were more responsible, sensible and not as radical. But this raised the question of whether they really deserved it. In spite of this, around eight-million women were given the vote in 1918, which was seen as a huge triumph and success. To conclude the war helped women to an extent. It allowed them to come away from their "sphere" and do, what used to be, male dominated jobs. However, not all women gained the vote and the women who did not actually do a great deal of work during the war. Some women had achieved the vote and soon man more would follow. Liam Wilson ...read more.