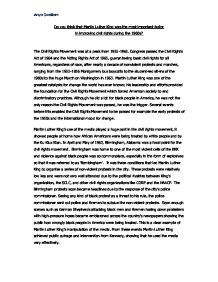 Do you think that Martin Luther King was the most important factor in improving civil rights during the 1960s?

Due to all the disagreement it was easy for the US government to ignore them. Martin Luther King, however, created a unified message of non-violent protest; this can be proven by the Washington March. Martin Luther King was criticised for not improving the living standards of ordinary black people. Despite the 1964 Civil Rights Act, 30% of Black Americans remained unemployed and on average black workers earned half of what white workers seemingly earned. Racial discrimination was still an ongoing problem for blacks in America despite the fact the Civil Rights Act of 1964 declared black people were to be treated equally to whites. People began to doubt Martin Luther King's ideas of non-violent protests leading to many riots between 1965 and 1967. The most serious was in the Watts area of L.A during August 1965; there were around 30,000 rioters and 34 deaths during this period. Although this was said to be because of Martin Luther King's failures, he remained more successful than Black Nationalists. King passed many significant laws and helped give Black Americans rights, while Black Nationalists did not. Furthermore, Martin Luther King had millions of supporters while the Black Panthers, for instance, had a mere 2000. ...read more.

Another factor which affected the Civil Rights was the broader societal changes. In the 1960s, the power of the media was immense. The Vietnam photo by Eddie Adams was extremely powerful; it shocked millions around the world and caused an antiwar sentiment in the United States. Also, many students were protesting at universities. The criticism of 'hypocritical' government policies also helped for the Civil Rights Movement, the Americans were fighting against a racist Nazi state and they were criticised for being hypocrites as they were racist to their own nation. This was pressure Martin Luther King was able to capitalise on- using, for example, the media. In conclusion, Martin Luther King was clearly essential in changing rights for black people in America but he was not the most important figure, he was the catalyst. For instance, the media, local pressure groups, WWII, Kennedy and broader societal changes also played a immense part. There were many pressure groups that laid the foundation for legal changes. Although many other factors were important in helping Blacks to gain more Civil Rights in the 1960s, King's importance cannot be doubted. He was the catalyst for change; he unified the Civil Rights Movement and created a message of non-violent protest. He also manipulated the media in order to gain the public support and changed many laws, rapidly. ?? ?? ?? ?? Anya Sweilam ...read more.