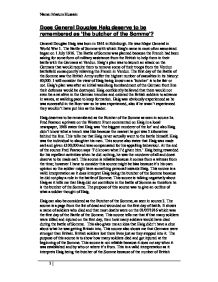 Does General Douglas Haig deserve to be remembered as the butcher of the Somme(TM)?

Does General Douglas Haig deserve to be remembered as 'the butcher of the Somme'? General Douglas Haig was born in 1861 in Edinburgh. He was Major General in World War 1. The Battle of Somme with which Haig's name is most often associated began on 1 July 1916. The Battle of Somme was planned because the French had been asking for some form of military assistance from the British to help them in their battle with the Germans at Verdun. Haig's plan was to launch an attack on the Germans that would require them to remove some of their troops from the Verdun battlefield consequently relieving the French in Verdun. The first day of the Battle of the Somme saw the British Army suffer the highest number of casualties in its history: 60,000. I will consider the view of Haig being known as a 'butcher' is to be fair or not. Haig's plan was after an initial weeklong bombardment of the German front line their defences would be destroyed. Haig confidently believed that there would not even be a rat alive in the German trenches and ordered the British soldiers to advance in waves, at walking pace to keep formation. ...read more.

Haig kept sending British soldiers over the top and that's the reason of Britain loosing too many soldiers. As a commander Haig should have taken this into consideration and come up with a solution and a better one than the Germans. The purpose of this source is to inform people of Haig's mistakes. This source is reliable because John Laffin researches about the war and then took people on battlefield field tours. This source is a valid interpretation as it interprets Haig being the butcher of the Somme; however I need to take into account that the author is using the benefit of hindsight to produce this source, so some information might be misleading. However some people argue that Haig was only doing his job. Source 10 is one example, it is written by a Lieutenant in Yorkshire light infantry writing a letter to Daily Express in 1916. He stated that during the first half of the war 'There was an obvious genius for pure general ship.' This quote shows me that Haig did have good leadership skills; also Haig was successful in the previous war which was the Boer war. ...read more.

As a general who was successful in previous wars, and he did his best to make sure that the Anglo French were successful in defeating the Germans. We must take in consideration that Haig was not experienced in the trench welfare so it was a new experience for him. Also people can't complain about the deaths because when soldiers signed up for the war they were doing it to help their country therefore this shows us that they were willing to give there lives away. On the other hand as a historian I have taken into consideration those soldiers were also not experienced in the trench welfare. Furthermore Haig did afterward open up a charity because he felt for those soldiers who lost there life so he wanted to make up for it. As a historian I understand that Haig did lose all those life's however everyone makes mistakes and at the end of the day he did make up for it and he did win the war against the German, you also have to take into account that the Germans did put on a good fight. So in my opinion Haig was only doing his job. I have used sources provided to produce this interpretation. ?? ?? ?? ?? Name: Masum Hussain 1 ...read more.