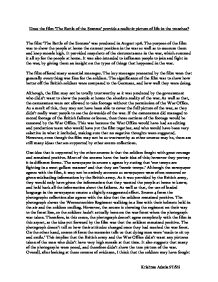 Does the film The Battle of the Somme provide a realistic picture of life in the trenches?

Does the film 'The Battle of the Somme' provide a realistic picture of life in the trenches? The film 'The Battle of the Somme' was produced in August 1916. The purpose of the film was to show the people at home the current position in the war as well as to reassure them and keep morale high. It provided snapshots of the circumstances in the war, which summed it all up for the people at home. It was also intended to influence people to join and fight in the war, by giving them an insight on the types of things that happened in the war. The film offered many essential messages. The key messages presented by the film were that generally everything was fine for the soldiers. The significance of the film was to show how better off the British soldiers were compared to the Germans, and how well they were doing. Although, the film may not be totally trustworthy as it was produced by the government who didn't want to show the people at home the absolute reality of the war. As well as that, the cameramen were not allowed to take footage without the permission of the War Office. As a result of this, they may not have been able to cover the full picture of the war, as they didn't really want people to see the downside of the war. ...read more.

These quotes show that many of the attacks were fairly unsuccessful. This source also conflicts with the film when it says that 'half a dozen Tommies... had been wounded during their unsuccessful attack.' This source is very useful as it provides information about each of the statements claimed by the film. As it is from a soldier's experience, it is quite reliable. However, there are factors which can make it unreliable. For example, we don't know what personal experiences that particular soldier has gone through to make him say that. We also don't know if this was the typical view of the soldiers altogether. As well as that, it is only from one soldier's point of view, so we don't know whether this actually happened or whether the soldier was exaggerating. Another source that held opposing views to the film was source 43. In this source, a soldier is singing about an old battalion that had got lost. The words 'if you want to find the old battalion' imply that there were quite a large number of casualties as a battalion is a large group of soldiers. Source 22 also disagrees with the film, as Private W. Hay. said 'it was criminal to send men in broad daylight....without any cover of any sort whatsoever.' This shows how the British tactics weren't well thought out, as many regiments and battalions had been sent in without any form of camouflage, which meant that Britain was practically giving the soldiers away. ...read more.

However, the author may have overstressed this idea as a way to sell more books. According to source 26 and Private Leonard Hart, wounded Tommies 'had been cruelly left to die.' Therefore disproving the statement provided by the film that wounded soldiers were attended to quickly. The painting by C. R. W. Nevinson in source 28 shows No Man's Land. In this illustration of No Man's Land, there are many soldiers trying to make their way across to the German side. There are also many wounded or dead people lying on the ground, just left there. This supports source 16, in disproving that soldiers were attended to quickly. However, the illustration was painted in 1919 by an official war artist. As it was painted by a war artist, there is a chance of propaganda reflecting in the painting. Although, the painting still shows how many were abandoned in No Man's Land. Overall, the sources suggest that the medical services provided for the soldiers was not very good as various numbers of soldiers were deserted and not tended to. On the whole, the film doesn't really give a very realistic view of what life was like in the trenches, as it misses out on the full picture in many areas. Although many of the sources contradict the film in a lot of areas, quite a lot of other sources support certain factors brought up by the film. However, the sources suggest that the key messages provided by the film are still important. ?? ?? ?? ?? Krishma Adatia 9T/9ii ...read more.