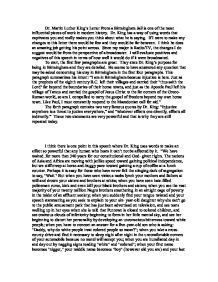 Dr. Martin Luther King's Letter From a Birmingham Jail is one of the most influential pieces of work in modern history.

Dr. Martin Luther King's Letter From a Birmingham Jail is one of the most influential pieces of work in modern history. Dr. King has a way of using words that captivates you and really makes you think about what he is saying. If I were to make any changes to this letter there would be few and they would be far between. I think he does an amazing job getting his point across. Since my major is Radio/TV, the changes I do suggest would be from the perspective of a broadcaster. I will evaluate positives and negatives of this speech in terms of how well it would do if it were broadcasted. To start, the first few paragraphs are great. They state Dr. King's purpose for being in Birmingham and they are detailed. He seems to have answered any question that may be asked concerning his stay in Birmingham in the first four paragraphs. This paragraph summarizes his intent: "I am in Birmingham because injustice is here. Just as the prophets of the eighth century B.C. left their villages and carried their "thus saith the Lord" far beyond the boundaries of their home towns, and just as the Apostle Paul left his village of Tarsus and carried the gospel of Jesus Christ to the far corners of the Greco-Roman world, so am I. compelled to carry the gospel of freedom beyond my own home town. ...read more.

and your last name becomes "John," and your wife and mother are never given the respected title "Mrs."; when you are harried by day and haunted by night by the fact that you are a Negro, living constantly at tiptoe stance, never quite knowing what to expect next, and are plagued with inner fears and outer resentments; when you no forever fighting a degenerating sense of "nobodiness" then you will understand why we find it difficult to wait. There comes a time when the cup of endurance runs over, and men are no longer willing to be plunged into the abyss of despair. I hope, sirs, you can understand our legitimate and unavoidable impatience." If this speech were being broadcast this is the part I can see being repeated over and over again on various news stations. I think this section of the speech has such a power effect because it takes the reader or listener and directly places them in the shoes of black person of this time period. Even though plenty of years have passed since this speech was written, this portion of the speech still does to people what it did the day it was written. It lends a new perspective to what is being said. No longer is the letter just a series of complaints. At this point it has turned into a personal experience. ...read more.

I hope this letter finds you strong in the faith. I also hope that circumstances will soon make it possible for me to meet each of you, not as an integrationist or a civil rights leader but as a fellow clergyman and a Christian brother. Let us. all hope that the dark clouds of racial prejudice will soon pass away and the deep fog of misunderstanding will be lifted from our fear-drenched communities, and in some not too distant tomorrow the radiant stars of love and brotherhood will shine over our great nation with all their scintillating beauty." This letter makes a very peaceful closing. The tone of the letter clearly conveys that Dr. King is not out to create riots or cause problems. He creates controversy, as it is needed, in a very peaceful and classy way. The closing of the letter summarizes what Dr. King is all about. Although I am a big fan of Dr. Martin Luther King, his speeches do have some room for improvements. The number one problem I see in this speech is its length. Dr. king is very good at making his point by using example after example to explain himself. There are a few parts in this speech where you can completely edit out a few paragraphs because they simple restated what the last paragraph said. If this speech were broadcast, I could see its length being a problem. Viewers would tend to be bored by his constant reiteration. ...read more.