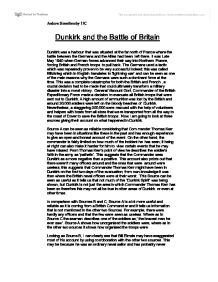 Dunkirk was a harbour that was situated at the far north of France where the battle between the Germans and the Allies had been left there. It was Late May 1940 when German forces advanced their way into Northern France, forcing British and French troops to pull back. The Germans used a tactic which was repeatedly proven to be very successful indeed; this was called Blitzkrieg which in English translates to ‘lightning war’ and can be seen as one of the main reasons why the Germans were such a dominant force at the time. This was a complete catastrophe for both the British and French, a crucial decision had to be made that could ultimately transform a military disaster into a moral victory. General Viscount Gort, Commander of the British Expeditionary Force made a decision to evacuate all British troops that were sent out to Dunkirk. A high amount of ammunition was lost by the British and around 30,000 soldiers were left on the bloody beaches of Dunkirk. Nevertheless, a staggering 350,000 were rescued with the help of volunteers and helpers with boats from all sizes that were transported from all the way to the coast of Dover to save the British troops. Now I am going to look at three sources giving their account on what happened in Dunkirk.

Source A can be seen as reliable considering that Commander Thomas Kerr may have been in situations like these in the past and has enough experience to give an open and honest account of the event. On the other hand, the commander is fairly limited on how much of the incident he has seen; it being at night can also make it harder for him to view certain events that he may have missed. From Thomas Kerr’s point of view he describes the soldier’s faith in the army as ‘pathetic’. This suggests that the Commander sees Dunkirk as a more negative than a positive. This account also points out that there weren’t many officers around and the ones that were around were useless, this suggests that Commander Thomas Kerr might have been in Dunkirk on the first two days of the evacuation; from own knowledge it was then where the British naval officers were at their worst. This Source can be seen as useful as it tells us that not much of the ‘Dunkirk Spirit’ was being shown, but Dunkirk is not just the area in which Commander Thomas Kerr has been so therefore this may not all be true in other areas of Dunkirk or even at other times.

In comparison with Sources B and C, Source A is a lot more useful and reliable as it is coming from a British Commander and it tells us information that is not mentioned in the other two Sources. For example, there were hardly any officers and that the few were seen as useless. Where as in Source C the seaman describes one of the soldiers as,’ the bravest man he ever saw’. Source A shows how unorganised the soldiers were, where as in the other two sources it shows how organised the troops were.

Looking as Source B, I can clearly see that Bill Elmsie may have exaggerated most of his account by using corroboration with the other two sources. This may be because he was an ordinary naval sailor and has probably never witnessed such events like Dunkirk in the past until this moment and because of pure excitement. Elmsie says that he glanced back at the beach when he explained certain events happening, this is brief. He also points out that he was in danger himself so it gives us information about how life threatening Dunkirk was. This could be seen as useful considering that there is evidence of the Dunkirk Spirit being shown and shows propaganda. It can also be seen as useful because it tells us that the soldiers were lined up in columns and there were German bombers present at the time.

Comparing Source B with Source C and A. Source B gives more information based on how the Germans attacked the British but is exaggerated looking at the words used.

Source C is incredibly unreliable taking into account that this man is not in either the army or the navy. By looking at previous accounts of Dunkirk many have said that the Germans were too strong for the British to handle, this seaman apparently has seen a sergeant who stood his ground blazed away the Germans. This source is also hugely biased and is dishonest as from own knowledge the Germans were too strong for the British and there was very little the British could do at the time. This source also doesn’t corroborate with Source A where the Commander describes the Army’s faith as ‘pathetic’.

A Bren gun is a heavy piece of weaponry that takes up to two or three soldiers to use; in Source C the seaman describes the sergeant as picking up this Bren gun with his own two hands as he drove the Germans off with it which cannot be done. Furthermore, by own knowledge the German planes used at Dunkirk were very strong indeed and firing at the planes will make no difference what so ever. Further research also shows that the Germans carried out a continuous process to keep refuelling after dropping several bombs at Dunkirk; this may be the reason why the German planes left and not because of the RASC sergeant. Source C is the least reliable sources out of the three that gives an honest account of what actually happened in Dunkirk. However, this could be useful to show the propaganda and again highlights the Dunkirk Spirit being used. Source C can also be seen as a great act of defiance.

Dunkirk can be regarded as one of the greatest historical events of all time. The nine day evacuation process rescued many French and British soldiers and made them heroes. All three sources shown cannot be exactly one hundred per cent useful on describing its account of Dunkirk but they can be useful in ways to identify what people’s thoughts were about the event. Another reason you may wish to consider is that there were many thousands In Dunkirk and the beaches of Dunkirk were massive, so it is almost impossible to be able to understand everything that has happened in Dunkirk using only three accounts.

The most useful sources out of the three is probably Source A and Source B, these sources give some clues into how Dunkirk must have been like, nothing like Source C which is hugely exaggerated by it not matching with other sources and not much is learnt from the source but the propaganda used to show the Dunkirk Spirit. Comparing Source C to Source A, Source C describes the soldiers as brave as if they could take on any of the Germans; Source A however portrays different views, for example how some of the officers were useless and how their faith in the navy was ‘pathetic’. All three accounts may have been written at different times and the limitation of how much they have seen can also effect what their approach was like.

Looking at all three sources I could say that the Commander was in Dunkirk on the 27th May, the worst day and hopes of Operation Dynamo being a success was very little. All three sources can also be described as being not that useful considering that all three are written from the British and none from the German side of the argument, so this may explain why they may put a spin to their account and even is biased on what is being described. Furthermore, a couple of lines from three different people could not possibly retell a story of an event so immense like Dunkirk. Overall Dunkirk can be seen as both a disaster and a triumph. A disaster because of how the Germans attacked (the Blitzkrieg) and how the Germans could have taken over.

From my own knowledge, the Belgians surrendered in the early stages of the evacuation process and the Italians decide to take the German’s side making it very difficult for the British Expeditionary Force. Around 90 per cent of heavy equipment was lost, 30,000 troops were abandoned on the beach and 200 ships and planes were lost as well. None of the Sources contain information on how the British coped with less ammunition to use and didn’t mention anything about the British planes that were at Dunkirk, just the German air superiority. On the other hand, Dunkirk can be seen as a triumph bearing in mind that the operation took out to evacuate many soldiers, 350,000 were rescued approximately in only 9 days, the Dunkirk Spirit was one main reason why the operation was a success, and this can be seen in Source C where it related to the Dunkirk Spirit but none of the sources again describe at what day they were at Dunkirk. With courage and determination the British troops made it to the other side. Gen Von Rustedt slopped his tanks which may describe why so many soldiers were rescued and made the triumph possible. The Germans saw Dunkirk differently; they put up their view of total victory and the concept of the Fortress Europe. There is so much information that all three Sources doesn’t show which may make them only partly useful in understanding Dunkirk.