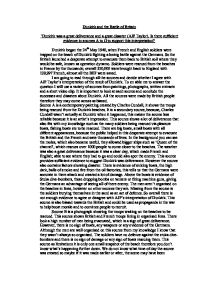 Dunkirk and the Battle of Britain - 'Dunkirk was a great deliverance and a great disaster (AJP Taylor). Is there sufficient evidence in sources A to G to support this interpretation?

Dunkirk and the Battle of Britain 'Dunkirk was a great deliverance and a great disaster (AJP Taylor). Is there sufficient evidence in sources A to G to support this interpretation? Dunkirk began the 24th May 1940, when French and English soldiers were trapped on the beach of Dunkirk fighting a losing battle against the Germans. So the British launched a desperate attempt to evacuate them back to British soil where they would be safe, known as operation dynamo. Soldiers were rescued from the beaches in France by the thousands; overall 350,000 were brought back to England with 139,997 French, almost all the BEF were saved. I am going to read through all the sources and decide whether I agree with AJP Taylor's interpretation of the result of Dunkirk. To en able me to answer the question I will use a variety of sources from paintings, photographs, written extracts and a short video clip. It is important to look at each source and conclude the successes and disasters about Dunkirk. All the sources were made by British people therefore they may come across as biased. Source A is a contemporary painting created by Charles Cundall, it shows the troops being rescued from the Dunkirk beaches. It is a secondary source, because, Charles Cundall wasn't actually at Dunkirk when it happened, this makes the source less reliable because it is an artist's impression. This source shows a lot of deliverance that also fits with my knowledge such as the many soldiers being rescued via pleasure boats, fishing boats etc to be rescued. ...read more.

So of the things that this source misses out as far as bad things go is the fact that they lost many lives, including the lives lost when the Queen of the Channel (the first boat to use the moles) was sunk. Also it doesn't include the great number of men that were wounded fleeing from the attacking Germans. Overall this source is extremely biased, so it will certainly say it was deliverance and not a failure. Also it was certainly used as propaganda and it doesn't give any information on the evacuation itself. So source D says that Dunkirk was a HUGE deliverance and not a failure at all. I feel that source D is a quite an important source and it clearly does give enough evidence to agree with part of AJP Taylor's interpretation. That part being that Dunkirk was deliverance, and in the source there is the odd reference to Dunkirk being a failure, but clearly there is not enough evidence to support this interpretation. Source E is newspaper extract from daily express on May 31st in 1940, which is a different type of source from the previous four that I have evaluated This source enhances words to make the reader more interested and to persuade them to read on such as 'Histories strongest armada' and Inferno of the bombs and shells'. In the newspaper extract it says that tens of thousands of soldiers were already safely back home when the report was written and also that the relationship between the British and the French was getting better all the time because they were working together as a team and relying and each other more and more as the evaluation progressed (French more than British). ...read more.

If you look at source A you will see a lot of action, and creates the impression that it was very chaotic, however if we look at source B that is also a picture of a beach we can see the opposite. It shows soldiers relaxed and organised. A main element to the success of 'The evacuation of Dunkirk' would be the existence of the moles, however none of these sources mentioned such meaning. We were not told of a huge disaster including 'Queen of the channel' which was sunk whilst moving out to sea with 1000's if soldiers. Another thing that we are not told about is the huge number of deaths and wounded that resulted in the evacuation from Dunkirk. We are not told of the tactics that the British soldiers used to camouflage themselves from the attacking German planes from above. Some of these tactics include the fact that the British soldiers buried themselves in the sand to prevent the Germans seeing them. Therefore I conclude that looking back at my statement 'Dunkirk was a great deliverance and a great disaster' I think that there was not sufficient evidence to support this quotation because I sources that I have read apart from one have been totally biased towards Britain. The only exception was source F this showed both sides and point of views and contained sufficient evidence although it would because it was written by AJP Taylor. Most of the other sources lacked evidence and didn't fit with my knowledge and were used for propaganda to boost morale. However taking into account that evidence was more for the patriotic feel, which boosted morale on home front, therefore balanced deliverance of Dunkirk. ...read more.