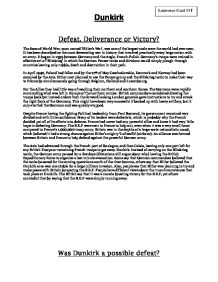 Dunkirk Defeat, Deliverance or Victory? The Second World War, soon named 'Hitler's War', was one of the largest-scale wars the world had ever seen. It has been described as the most devastating war in history that involved practically every large nation with an army. It began in 1939 between Germany and the Anglo-French-Polish. Germany's troops were trained in effective art of 'Blitzkrieg' in which the German Panzer tanks and divisions would simply plough through countries leaving only rubble, death and destruction in their path. In April 1940, Poland had fallen and by the 27th of May Czechoslovakia, Denmark and Norway had been occupied by the Axis. Hitler next planned to use the Panzer group and the Blitzkrieg tactic to make their way to France by simultaneously going through Belgium, Holland and Luxembourg. For the Allies they had little way of reaching their northern and southern forces. The Germans were rapidly surrounding what was left in Europe of the northern armies. British commanders considered drawing the troops back but instead orders from the forward looking London generals gave instructions to try and attack the right flank of the Germans. This might have been very successful if backed up with heavy artillery, but it only startled the Germans and was quickly stopped. Despite France having the fighting Political leadership from Paul Reynaud, its government remained very divided and with little confidence. Many of its leaders were defeatists, which is probably why the French decided put all of its efforts into defence. France had never had any powerful allies and knew it had very little hope in defeating Germany. The B.E.F were sent to France to help out, even when it was a very small force compared to France's 1,000,000-troop army. Britain was in the depths of a large-scale nationalistic mood, which believed it had a strong chance against Hitler's mighty 'Luftwaffe' (airforce). An alliance was formed between Britain and France to help defend against the powerful German army. ...read more.

This would be described as a psychological victory. A well-ordered and calm evacuation could be an aspect of victory in itself. Also if the Troops emerged with an increase in morale, this could also be incorporated into the psychological aspects of a victory. The most important aspect, which would have the greatest effect on the war, would be the number of troops rescued. I know that if it wasn't for the mass rescue of British (and some French) soldiers, it would not of been possible to continue the fight against Germany. Britain would have been forced to withdraw from the war, and sign some sort of treaty with Hitler. Another very important aspect for Dunkirk to be a victory would be that the troops would have to emerge from the event with higher morale and some sort of 'Dunkirk Spirit', this links with the psychological victory aspect of Dunkirk. Any event that could possibly strengthen Churchill's leadership will have a positive effect on how the civilian population looked upon Dunkirk and their leader. Many historians look upon Dunkirk as a great morale boosting victory. They do not mind what else happened as long as the majority of troops escaped and they escaped with smiles on their faces. Dunkirk was a great victory in one sense, because so many troops were evacuated so quickly. AJP Taylor's interpretation of the events in Dunkirk describes how '338,226 men were saved by over 860 ships and small vessels', The basic message in this is that Operation Dynamo was an order for as many men as possible to be evacuated, and that's what happened. It also mentions the amount of equipment lost, but in the eyes of the British and AJP Taylor, this did not matter. The evacuation of Dunkirk was the evacuation of the B.E.F and French troops, not the evacuation of 500,000 tons of ammunition. This is a very important note relating to the psychological aspect of Dunkirk, the British did exactly what they planned to do, and Germany failed to stop it. ...read more.

Britain was temporarily defeated before they had even started the evacuation. I believe that if they had no chance against Hitler's Blitzkrieg, then they were defeated and no spirit could change that. I agree that Dunkirk was a defeat in terms of panic and disorderly evacuation. I think that those first few days of evacuation, there was nothing but chaos, and W.B.A Gaze recalled officers shooting their guns to try and gain some order. Panic must of struck every soldier because they knew that if they didn't get out soon the Germans would simply wipe them out. Some say Dunkirk was a defeat because of the casualties and loss of troops suffered by the British and French. 30,000 were killed or injured in Dunkirk, this may sound a lot but when you compare it to the millions who lost their lives in World War II. 30,000 are a very small number for such an improvised evacuation. If 330,000 could escape with the possibility of 300,000 of them being killed or captured, Dunkirk was a very good result for Churchill. However often the legend of Dunkirk is emphasized or exaggerated, these few days did not win them war that is a very important point. But it had both short-term morale-boosting significance, and an essence of long-term significance. As soldiers took their only chance to live very seriously, competition for boats and some disorganization was inevitable. But the way in which they came together from Britain to go and sail to rescue their loved ones will always bring a tear to a Grandsons eye. The value of ammunition and vehicles never exceeded the value of those men's lives, which is why Churchill chose he would rather have his men safe, then some man made metal. 474 aircrafts lost, 90 000 rifles gone, 20 528 motorcycles left to start themselves, 500 000 tons of ammunition lying on the outskirts of France. 1940 -338,226 Allied Soldiers ran away, only to run back twice as hard. The fall of the Nazi's was a fire, and Dunkirk was the spark. Laurence Gazi 11T ...read more.