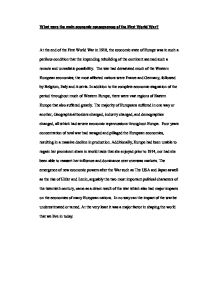 What were the main economic consequences of the First World War?

At the end of the First World War in 1918, the economic state of Europe was in such a perilous condition that the impending rebuilding of the continent seemed such a remote and unrealistic possibility.  The war had devastated much of the Western European economies; the most affected nations were France and Germany, followed by Belgium, Italy and Austria. In addition to the complete economic stagnation of the period throughout much of Western Europe, there were vast regions of Eastern Europe that also suffered greatly. The majority of Europeans suffered in one way or another, Geographical borders changed, industry changed, and demographics changed, all which had severe economic repercussions throughout Europe.  Four years concentration of total war had ravaged and pillaged the European economies, resulting in a massive decline in production. Additionally, Europe had been unable to regain her prominent share in world trade that she enjoyed prior to 1914, nor had she been able to reassert her influence and dominance over overseas markets. The emergence of new economic powers after the War such as The USA and Japan aswell as the rise of Hitler and Lenin, arguably the two most important political characters of the twentieth century, came as a direct result of the war which also had major impacts on the economies of many European nations.  In no way can the impact of the war be underestimated or tamed. At the very least it was a major factor in shaping the world that we live in today.

The First World War completely shattered and devastated many European economies. In Germany alone the cost of the war was estimated at $40 billion USD. When considering the fact that there has subsequently been 87 years of inflation since this expenditure, in modern terms the figure would be closer to $1100 billion USD[1]. The cost of the war was equally high in France and Russia and well into the billions in Italy, Belgium, Britain and Poland.

Another major economic impact of the war was that it narrowed the gap between the economies of both Europe and the United States of America. Despite the USA being well into its industrialization programme and having a steadily growing economy the European economy was still superior to the US economy. However the devastating effects of the First World War resulted in massive economic stagnation and declination, which allowed the US to catch up and bridge the gap. In the period following the War it is estimated that the US economy grew by triple that of Europe’s economy in relative terms[2]. As a result of this economic alteration and switch in economic superiority, investment in Europe fell substantially, which effectively enhanced the problems already facing the economies of the continent. Newly established Asian companies relocated to the US, and many European firms decided to cross the Atlantic to save their businesses. This mass movement and relocation of businesses from Europe to the US inflicted more desolation and misery upon the governments of war torn Europe. The loss of investment resulted in a reduction in the generation of income, which was critically necessary at the time in order to improve and rebuild the devastated economies.

Despite the large-scale economic stagnation and decline that affected many sectors of European economies as a result of the First World War, many European economies were saved by the resurrection and growth of other various industrial sectors. Although the major industries such as textiles and shipbuilding were effectively diminished forever, other industrial sectors such as construction industries and their suppliers flourished thus rendering various European economies susceptible to economic growth and potential future economic prosperity.  The demand for goods such as bricks and tools created the guaranteed outflow of resources, which were critical for laying the necessary foundations to entice economic growth. Therefore some industries were able to capitalise in the aftermath of the war.

The rise in inflation rates and the devaluing of many currencies throughout Europe also prevented the immeadiate recovery of many European economies.  The theory of  “invisible devalue” is often used by historians to describe the period of time after the war where no trading or saving took place, which therefore meant that many currencies throughout Europe were effectively useless.

The First World War also served as the major catalyst that resulted in the rise of communism.  Russia’s failure during the War underlined the need for large-scale changes throughout the nation and these changes found a new face via the emergence of the Bolsheviks and most notably Vladimir Lenin.  Lenin’s implementation of his War Communism economic strategy resulted in the alienation of Russia from mainland Europe and thus the complete destruction of trading links between East and West. In terms of the bigger picture this alienation and destruction of major trading routes further contributed to the economic declination of European economies and further dented the economies of the countries that were active trading partners with Russia.

Economically, the war completely devastated Europe. Every European economy suffered through the war and trading amongst European countries never really recovered. Through the political change in Europe, the economy suffered and this effectively allowed the USA to catch up and overtake the European economy in the preceding years of the war.  Although many short-term problems were created by the war, the long-term problems far outweighed those in the short term. These long-term factors effectively led to the Second World War and the outbreak of the Cold War. Effectively the war shaped the Twentieth Century, as we now know it.

How the economy suffered?

[2]  The Cambridge Economic History of Modern Britain, Roderick Floud and

suffered? (after the First World War)

[1]  Source taken from internet website: http://www.schoolshistory.org.uk/ASLevelHistory/week3impactofwar.htm. Website gives a brief explanation on the impacts of the war in Germany