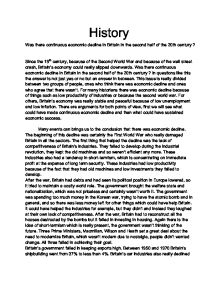 So prices decreased, inflation too as well as the balance of payment problem but this created unemployment. So the government reduced interest rates and people began to buy many things using credits and recreated the same cycle over and over again. This stop-go economy continued until the Prime Minister Tony Blair and Georges Brown, the Chancellor of the Exchequer, who didn't approve the power the government to change interest rates and so they gave this power to the bank of England which was free of political interferences. Wilson was really concerned by the power of the trade Unions which he considered too big so he released the "white paper" which reduced the Union's power: however this was not considered a good thing for a Prime Minister. In the 1970s Britain had to face another crisis. In 1973 the price of oil quadrupled due to a problem between Britain and the middle east. In 1973-1974 there was the miner's strike, who hated the Tories lead by Heath as Prime Minister and so miners wanted to stop him. So miners stopped producing which created a huge strike and which damaged Britain's economy. Responding to this damaging strike the government, and more precisely Edward Heath, introduced the three day week which destroyed the economy since four days per week workers were not working. ...read more.

Thatcher. It proclaims that there were too many nationalizations, too little investment and competition, too much spending on the welfare state, too little focus on modern management techniques and too much government intervention. This created the disaster called the "Winter of Discontent" which finished in 1979. Thanks to Mrs. Thatcher Britain became competitive. The second, the Golden Age view, says that the post war boom was a period of sustained social and economic success. Britain recovered admirably well from the war and from the crisis which created continuity. However in this view, Mrs. Thatcher damaged the industries by creating an economy based on services such as shops or banks rather than on industries. The third view, the "balanced" view says that Britain recovered relatively well and that Mrs. Thatcher helped in some points Britain's economy. This view argues that the period 1951-1997 was a successful period in Western Europe. The questions cannot be answered properly, we just proved that the answer is more than just yes or no. An evaluation of the economic situation in 1997 has to recognize the extent of progress in the living standards and the consumer economy, people had more money, more food, better health, were better housed... One thing that cannot be argued is that this period benefited of great peace and stability than ever before. ...read more.