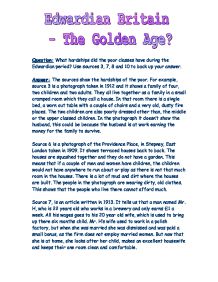 Question: What hardships did the poor classes have during the Edwardian period? Use sources 3, 7, 8 and 10 to back up your answer. Answer: The sources show the hardships of the poor. For example, source 3 is a photograph taken in 1912 and it shows a family of four, two children and two adults. They all live together as a family in a small cramped room which they call a house. In that room there is a single bed, a worn out table with a couple of chairs and a very old, dusty fire places. The two children are also poorly dressed other than, the middle or the upper classed children. ...read more.

There is a lot of mud and dirt where the houses are built. The people in the photograph are wearing dirty, old clothes. This shows that the people who live there cannot afford much. Source 7, is an article written in 1913. It tells us that a man named Mr. H, who is 22 years old who works in a brewery and only earns �1 a week. All his wages goes to his 20 year old wife, which is used to bring up there six months child. Mr. H's wife used to work in a polish factory, but when she was married she was dismissed and was paid a small bonus, as the firm does not employ married women. ...read more.

For them to live on that kind money a week they must not purchase unnecessary items such as a half a penny newspaper and that the children cannot have pocket money for dolls, marbles or sweets. The father must not smoke any tobacco, and must not drink any beer. The mother must never buy pretty clothing for herself or for her children. Also the wage-earner must never be absent from work for a single day. So overall, the hardships of the poor people are that they could not afford as much as the middle and upper class. They tried there best to look after and raise their children with the money they had, often going without food for many days. Their children would have been expected to work and not be educated. Their health care and hygiene would also have been poor. ...read more.