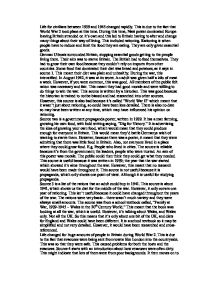 Effect of Civilians in WW2

Life for civilians between 1939 and 1945 changed rapidly. This is due to the fact that World War 2 took place at this time. During this time, Nazi power dominated Europe leaving Britain stranded on it's own and this led to Britain having to alter and change many things about their way of living. This included rationing. Rationing is when people have to reduce and limit the food they are eating. They are only given essential goods. German U-boats surrounded Britain, stopping essential goods getting to the people living there. Their aim was to starve Britain. The British had to feed themselves. They had to grow their own food because they couldn't rely on imports from other countries. Some food that dominated their diet was bread and potatoes, as it says in source 1. This meant their diet was plain and unhealthy. During the war, this intensified. In August 1942, it was at its worst. An adult was given half a kilo of meat a week. However, if you were common, this was good. All members of the public felt ration was necessary and fair. This meant they had good morale and were willing to do things to win the war. This source is written by a historian. This was good because the historian is trained to not be biased and had researched into other sources. However, this source is also bad because it's called "World War II" which meant that it wasn't just about rationing, so could have been less detailed. There is also no date so may have been written at any time, which may have influenced his opinion on rationing. Source two is a government propaganda poster, written in 1939. It has a man farming, growing his own food, with bold writing saying, "Dig for Victory." It is advertising the idea of growing your own food, which would mean that they could produce enough for everyone in Britain. This would mean they'd battle Germanys wish of wanting to starve them. ...read more.

Many lives altered and changed throughout this time. Source 15 is a letter from Humphrey Jennings to his wife. He suggests that morale was very high. It also seems as though they had confidence in beating Hitler. He mentions people singing together, another expression of happiness and morale. Many girls in the WVS served hot drinks to fire fighters during raids. This suggests that they hadn't been hit much and everyone was willing to help in the war. Source 16 is a report by local officials on conditions in the east end of London in September 1940. He says the opposite of source 15, and says that morale was low and that everything was hysteria. "There is no humour or laughter." This implies that there is a negative mood and morale is low. It also seems as though they'd been hit hard as there's no milk etc. Source 15 was a letter written to a wife, in October 1940. The aim of the letter may have been for reassurance to his wife to assure her everything's well. This means he may have exaggerated or lied to her to keep his wife happy. The source is reliable because it's a primary source and was written to his wife, so it wasn't publicised. It's reliable as it was written in October 1940, which was then the Blitz happened. Source 16 was a report from local officials. This meant people who work for the government wrote it. This means that it was information for the government and the civilians wouldn't have seen it so it wouldn't be exaggerated for morale purposes. This meant they could evacuate and rebuild a certain area. The source is about conditions in the East end of London. This is a place that is most likely to be hit hard. I think this source is more truthful. Source 16 is written in September 1940, which is different to source 16, as that's written in October 1940. ...read more.

There's also no censorship, making it reliable. Lives for women changed dramatically too as a result of the war. They now had the chance to volunteer for new jobs including driving trucks and buses, opening cranes, radio operators and many more satisfying jobs. A housewife writes source 20. She explains how she never has time to polish furniture and that dishes stack up easily. This may be because she's so busy in her new job. She then says how she thinks that now women have real jobs, she doubts that women would want to go back to being a housewife. The source doesn't mention what type of job she has, nor where she actually works. This source is written by a housewife in a diary, in 1942. As it's written in a diary, it's her own thoughts and none of it would be censored. It also means her writing wouldn't be exaggerated. Although, it doesn't say what background she's from. This diary entry was written in 1942. This means it was written during the war. And that means she, herself, experienced the war. As it's in 1942, and not at the beginning of the war in 1939, the novelty of having her new job would have worn off and this diary is now more reliable and more truthful. Although, it doesn't say what she thinks of the job nearing the end of the war. Her opinion may have changed. And it's also only looking at one year, which makes it less reliable. This source is useful because it's a primary source as it's written in her diary. This means it wouldn't have been exaggerated nor censored. However, it isn't useful because it only covers one year of the war and her opinion may have changed. Also, it isn't cross-referenced. To make it totally useful, it would need to be cross-referenced. Therefore, life has changed drastically for civilians during World War Two. Including diets, evacuation, Conscription and women going to work. For many people, life changed for the better, other's for the worse. ?? ?? ?? ?? ...read more.