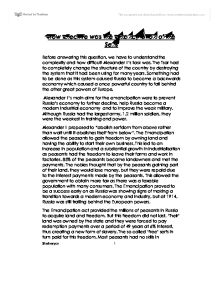 Effectiveness of the Emancipation Serfs

How Effective was the Emancipation of the Serfs Before answering this question, we have to understand the complexity and how difficult Alexander II's task was. The Tsar had to completely change the structure of the country by destroying the system that it had been using for many years. Something had to be done as this system caused Russia to become a backwards economy which caused a once powerful country to fall behind the other great powers of Europe. Alexander II's main aims for the emancipation were to prevent Russia's economy to further decline, help Russia become a modern industrial economy and to improve the weak military. ...read more.

85% of the peasants became landowners and met the payments. The nobles thought that by the peasants gaining part of their land, they would lose money, but they were repaid due to the interest payments made by the peasants. This allowed the government to obtain more tax as there was a taxable population with many consumers. The Emancipation proved to be a success early on as Russia was showing signs of making a transition towards a modern economy and industry, but at 1914, Russia was still trailing behind the European powers. The Emancipation act provided the millions of peasants in Russia to acquire land and freedom. ...read more.

This made the serfs, which were over 80% of the population, very discontented as they felt that the land should be owned by them. Furthermore, the Tsar planned on creating investive farmers to boost the economy, but there were no incentives to do so as it could easily be divided up with the other serfs. Serfs had no money to spend or even invest and due to this, Russia was unable to improve economically. The Emancipation at first seemed very beneficial but with great reform comes great consequences and these were put on Alexander II which made him seem na�ve and people questioned if he was a good Tsar. Alexander II attempted to do too much by trying to make both the peasants and the nobility happy. ?? ?? ?? ?? Sheheryar 1 ...read more.