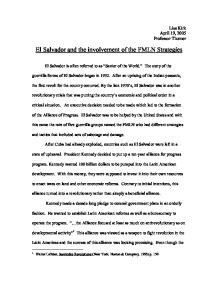 El Salvador and the involvement of the FMLN Strategies

Lisa Kirk April 19, 2005 Professor Thurner El Salvador and the involvement of the FMLN Strategies El Salvador is often referred to as "Savior of the World." The story of the guerrilla forces of El Salvador began in 1932. After an uprising of the Indian peasants, the first revolt for the country occurred. By the late 1970's, El Salvador was in another revolutionary crisis that was putting the country's economic and political order in a critical situation. An executive decision needed to be made which led to the formation of the Alliance of Progress. El Salvador was to be helped by the United States and with this came the mix of five guerrilla groups named the FMLN who had different strategies and tactics that included acts of sabotage and damage. After Cuba had already exploded, countries such as El Salvador were left in a state of upheaval. President Kennedy decided to put up a ten-year alliance for progress program. Kennedy wanted 100 billion dollars to be pumped into the Latin American development. With this money, they were supposed to invest it into their own resources to enact taxes on land and other economic reforms. Contrary to initial intentions, this alliance turned into a revolutionary rather than simply a beneficial alliance. Kennedy made a decade long pledge to commit government plans in an orderly fashion. ...read more.

FMLN was not able to defeat the Salvadoran military, it had developed a sufficient military capacity that was very likely itself to be militarily defeated. The revolutionary groups agreed to combine their actions and put together guerrilla groups.4 They put together five guerrilla groups that formed the Farabundo Marti National Liberation Front (FMLN). (The FMLN developed the FMLN? I would change this but I'm confused. It seems this paragraph be before the paragraph right above it because it explains the FMLN and how they formed whereas the prior paragraph makes mention of what the FMLN is doing.) The FMLN developed out of Marxist groups and guerrilla fighting. The overall strategy of the FMLN was "Prolonged Popular War", which meant to borrow directly from the Asia revolutionary thought.5 Although the FMLN and the FDR had conflicting views, the two groups united in their determination to remove the oligarchical and military rule. (What is the FDR?) Their goal was to replace the old system with massive land reforms and nationalization programs. When the FMLN announced the launching of a final offensive, the United States would find an irreversible situation in El Salvador. The FMLN's rural political powers were stronger then that of their government. They were more massive in numbers, training and technology that suggested the political capacity with the military. ...read more.