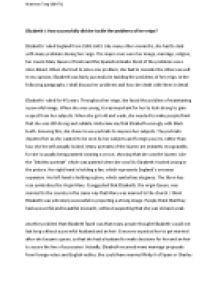 Elizabeth I: How successfully did she tackle the problems of her reign?

﻿Matthew Tang (08HT1) Elizabeth I: How successfully did she tackle the problems of her reign? Elizabeth I ruled England from 1558-1603. Like many other monarchs, she had to deal with many problems during her reign. The major ones were her image, marriage, religion, her cousin Mary Queen of Scots and the Spanish Armada. Most of the problems were inter-linked. When she tried to solve one problem, she had to consider the others as well. In my opinion, Elizabeth was fairly successful in tackling the problems of her reign. In the following paragraphs, I shall discuss her problems and how she dealt with them in detail. Elizabeth I ruled for 45 years. Throughout her reign, she faced the problem of maintaining a powerful image. When she was young, it was important for her to look strong to gain respect from her subjects. When she got old and weak, she needed to make people think that she was still strong and reliable. Historians say that Elizabeth was ugly with black teeth. Knowing this, she chose to use portraits to impress her subjects. The portraits depicted her as she wanted to be seen by her subjects and foreign powers, rather than how she herself actually looked. ...read more.

Elizabeth was quite successful in handling her marriage problem. The only drawback was that she failed to produce an heir and had to crown James, her cousin Mary Queen of Scots? son, as king on her deathbed. Religion was one of the thorny issues Elizabeth had to face. During her reign, England as bitterly divided by religion. Protestant extremists and Catholic extremists both posed a huge threat on Elizabeth, and a civil war might erupt. On one hand, Protestant extremists called Puritans wanted to wipe out all traces of the country?s Catholic past. On the other hand, Catholic extremists wanted to restore Catholicism in England and place a Catholic monarch on the throne. Also, Catholic countries in Europe could wage war on Elizabeth. To pacify both groups, she adopted a policy of moderation called the ?Middle Way?. To please the Protestants, she allowed the priests to marry and the services to be conducted in English. She promoted the construction of simpler churches and had the Bible translated in English. To please the Catholics, Elizabeth proclaimed herself as the ?Governor?, which meant the Catholics would still look up to the Pope as the ?Head of Church?. ...read more.

Eventually, England won the battle with pride due to excellent military tactics and more advanced ships. One being they were smaller, which meant that they were more maneuverable. Secondly, their guns fired faster and further. England survived as a Protestant country while Spain?s reputation was weakened in Europe. Since then, England started to explore overseas and began to build a ?British Empire?. The defeat of the ?invincible? Spanish Armada was one of Elizabeth?s biggest successes in her reign. To conclude, Elizabeth was very successful in dealing with threats to her throne, thanks to her advisors such as Lord Burghley. She was also a determined and clever woman, who always made wise decisions as evidenced by the way she handled her marriage. Her decision to use ?Middle Way? to deal with the conflict between the Protestants and Catholics had saved her from the possibility of a civil war. The victory over the ?invincible? Spanish Armada was another proof of her intelligence. She was able to maintain her image as a strong and powerful female monarch through the portraits. Elizabeth?s reign was known as the Elizabethan Age. Many historians believed that it was the ?Golden Age of England?. Known as ?one of England?s strongest monarchs?, Elizabeth cradled the country of England in her arms as they successfully overcame a very rough time. ...read more.