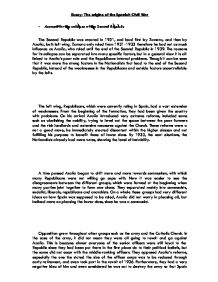 Essay: The origins of the Spanish Civil War- Account for the collapse of the Second Republic.

Essay: The origins of the Spanish Civil War - Account for the collapse of the Second Republic The Second Republic was created in 1931, and lead first by Zamora, and then by Aza�a, both left wing. Zamora only ruled from 1931-1933 therefore he had not as much influence as Aza�a, who ruled until the end of the Second Republic in 1939. The reasons for its collapse can be separated into many specific factors, but in a general view it is all linked to Aza�a's poor rule and the Republicans internal problems. Though it can be seen that it was more the strong factors in the Nationalists that lead to the end of the Second Republic, instead of the weaknesses in the Republicans and outside factors uncontrollable by the lefts. The left wing, Republicans, which were currently ruling in Spain, had a vast extension of weaknesses. From the beginning of the formation, they had been given the country with problems. On his arrival Aza�a introduced very extreme reforms, included some such as abolishing the nobility, trying to level out the space between the poor farmers and the rich landlords and extensive measures against the Church. ...read more.

They opposed Aza�a's reforms, especially the one the stated the size of the officer corps was to be reduced through early retirement, and even took part in the revolt of 1936. Furthermore, they had a very negative idea of him and even considered he was out to destroy the army so that Spain could become fully communist. The Church was separated in two, some lower clergy supported the Republicans, but the majority supported the Nationalists since Franco was more inclined to religion thus they hoped he could restore Spain to be Europe's most Catholic country again. In addition, the Republicans army depended on elected officers and militias, therefore the discussion of strategy took a long time, which slowed down everything, reduced efficiency and encouraged soldiers to organize themselves, thus leading to the use of various tactics. The last straw for Franco was the murder of a leader of the Falange and the CEDA, thus initiating his advancement throughout Spain, eventually ending in a right-wing dictatorship, due to pure weaknesses in Aza�a's poor decision making and rule in general. ...read more.

Francisco Franco was the leader of the Nationalists, the same one who lead them to victory. He is said to be skilled and strong-minded, and very loyal to his main beliefs. He was extremely organized and every strategy was carefully planned until the end, thus were practically always successful. He knew how to control the different Nationalist groups and maintain order; he was able to balance them, in some representing each and every one of them. In the words of the historian Puzzo "His head was a cemetery of dead ideas". In final analysis, the collapse of the Second Republic was highly influenced by the strengths of the Nationalists, but the main factor was the weak leadership of Aza�a and the problems between Republican groups. While the main problems of the Republicans were generated due to the fact that it consisted of many left-wing groups, the Nationalists also consisted in many right-wing groups, but problems were not generated due to this. The reason for this is because of the differences between the leaders, whereas Franco was a good leader, and knew how to control internal disputes, Aza�a was not able to due so and could not manage to minimize the problem so it would not go out of hand. ...read more.