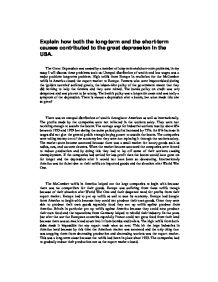 Explain how both the long-term and the short-term causes contributed to the great depression in the USA.

Explain how both the long-term and the short-term causes contributed to the great depression in the USA. The Great Depression was caused by a number of long-term and short-term problems, in my essay I will discuss these problems such as: Unequal distribution of wealth and low wages was a major problem long-term problem. High tariffs from Europe in retaliation for the McCumber tariffs in America closed the export market to Europe. Farmers who were impoverished during the 'golden twenties' suffered greatly, the laissez-faire policy of the government meant that they did nothing to help the farmers and they were ruined. The banks policy on credit was very dangerous and was proven to be wrong. The bank's policy was a long-term cause and was really a symptom of the depression. There is always a depression after a boom, but what made this one so great? There was an unequal distribution of wealth throughout American as well as internationally. The profits made by the companies were not reflected in the workers salary. They were not receiving enough to sustain the boom. The average wage for industrial workers rose by about 8% between 1923 and 1929 but during the same period profits increased by 72%. An 8% increase in wages did not give the general public enough buying power to sustain the boom. ...read more.

The farmers had to sell their goods so they lowered the price, in some cases they lowered it so much so that they would only break even or even be in debt. The government did nothing to help the farmers. They were far more interested in industries such as car manufacture, where the profits were much greater. It was not only farmers in this position; the working class across America who were already poor became poorer. Since the working class of America was 43% this meant that they had a very big problem on their hands. This brings us back to the issue of misdistribution of wealth in America. This was definitely a long-term cause because the working class had been suffering, especially the farmers throughout the Golden Twenties so it was not as if it was a sudden problem. The banks policy towards money lending and credit was very wrong. They believed that with the prosperity of the country and the ever-strengthening economy everyone would be able to pay back their loans. The banks were also giving out massive international loans, in some cases the bank was giving out more money than was asked for. Many people as we already know were taking out loans form the banks and investing it in the stock market. ...read more.

Finally the Wall Street Crash, some people believe that it is the sole reason for the depression, but as you can see above there were many long-term causes and not just this short-term cause to contribute. The Wall Street crash in my opinion is more a symptom of the Great Depression. The Wall Street Crash was caused by the reasons above. But because of the Wall Street crash businesses went bust which caused unemployment. This means that there was less money to spend causing other businesses to go bust or cut back on production. More people are made redundant or wages cut, which again means there is less money to spend and more businesses go bust. Followed again by more unemployment eventually leading to the great depression. As you can see there was many cause for the Great Depression, but surprisingly there were more long-term causes than short. This is surprising because it seemed so sudden that the depression came about. One day everyone was rich the next everyone was poor. When we look closely at 'The Gold Twenties' or 'The Jazz Age' they were not as good as they were made out to be. There were still the farmers and the working class a massive 43% of the population who were classed as poor. The only real winners in the 1920's was the elite 1% of the population who had 19% of the total spending power throughout the country. ...read more.