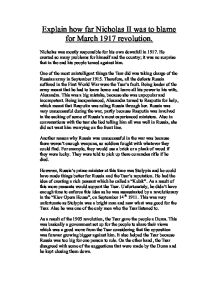 Explain how far Nicholas II was to blame for March 1917 revolution.

Explain how far Nicholas II was to blame for March 1917 revolution. Nicholas was mostly responsible for his own downfall in 1917. He created so many problems for himself and the country; it was no surprise that in the end his people turned against him. One of the most unintelligent things the Tsar did was taking charge of the Russian army in September 1915. Therefore, all the defeats Russia suffered in the First World War were the Tsar's fault. Being leader of the army meant that he had to leave home and leave all his power to his wife, Alexandra. This was a big mistake, because she was unpopular and incompetent. Being inexperienced, Alexandra turned to Rasputin for help, which meant that Rasputin was ruling Russia through her. Russia was very unsuccessful during the war, partly because Rasputin was involved in the sacking of some of Russia's most experienced ministers. Also in conversations with the tsar she lied telling him all was well in Russia, she did not want him worrying on the front line. ...read more.

As a result of the 1905 revolution, the Tsar gave the people a Duma. This was basically a government set up for the people to share their views which was a good move from the Tsar considering that the opposition was forever growing bigger against him. It also helped the Tsar because Russia was too big for one person to rule. On the other hand, the Tsar disagreed with some of the suggestions that were made by the Duma and he kept closing them down. The Tsar was not entirely to blame for the March 1917 revolution because the actions of Rasputin, "the Mad Monk" also contributed to its rising. As we know he controlled Russia through Alexandra, and this was beginning to ruin the Royal family's popularity. Rasputin's behaviour outside the walls of the palace was really damaging their reputation. He was a drunk who used prostitute's right under the watchful eye of the public. ...read more.

All this was a result of food shortages. This was because peasants who worked in the fields were taken out to fight in the war. As a result no food was being grown and all the food that was being transported was left at train stations and rotted because there wasn't a direct train route from the farms to the city. As we can see Nicholas's future as a Tsar looked bleak and it was predictable that his own people would turn against him in the end. I think his biggest downfall was taking charge of the army, because he was inexperienced and incompetent as a leader. The Russian army were very unsuccessful in the war, so all the defeats they suffered were the Tsar's fault which made him unpopular. Nevertheless, he did have some bright spells and knew opportunities to make him popular again. For example, Stolypin's idea of a rich peasant would have boosted his status as a Tsar again. Overall, I think the Tsar should have listened to his people more and gained more knowledge about their desires and opinions. ...read more.