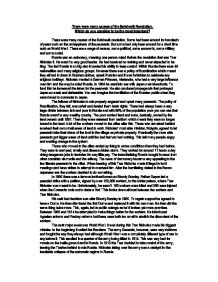 Explain how Marxism contributed to the Bolshevik Revolution

There were many causes of the Bolshevik Revolution. Which do you consider to be the most important? There were many causes of the Bolshevik revolution. Some had been around for hundreds of years such as the unhappiness of the peasants. But some had only been around for a short time such as World War I. There are a range of causes, some political, some economic, some military and some social. Russia was an autocracy, meaning one person ruled. Before the revolution that was Tsar Nicholas II. He wasn't a very good leader. He had received no training and never expected to be king. The fact Russia is so big also impeded his ability to keep control. Within Russia there were 40 nationalities and many religious groups. However there was a policy of Russification which meant they all had to dress in Russian clothes, speak Russian and it was forbidden to celebrate any religious holidays. Nicholas married a German Princess, Alexandra, who had a very large influence over him and the way he ruled Russia. In 1904 he went into war with Japan over Manchuria. ...read more.

The next major event was World War I. It was during this Tsar Nicholas made his biggest mistake. In the beginning it united the Russians. The army Generals, however, were very stubborn and fought the way they always had although World War I was a completely different type of war to any before it. This resulted in a quarter of the army being killed in 1914. This was very bad for morale on the battle ground and in Russia. In 1915 the Tsar decided to take control of the army, leaving the Tsarina behind to rule Russia. Nicholas taking over the army was a catalyst for the inevitable collapse of the autocratic regime in Russia. Tsarina Alexandra was not popular with the Russian public. They thought that she was spying for the Germans because of her German background. With the help of Rasputin, her sons 'healer,' they managed to turn the country into chaos. Rasputin dismissed ministers and replaced them with friends. Nothing was organised. Food, already in short supply, was being left to rot. This led to food prices rising, what had bought 5 bags of potatoes in 1914 only bought 3/4 of a bag in 1917. ...read more.

Kerensky armed and trained the Red Guard who defeated Kornilov. The Red Guard were now seen as heroes. Kornilov had, effectively, just trained the army who would later over throw him. After this Lenin returned. Kornilov's revolt, yet more defeats in the war and the lack of solutions from the Provisional Government had led to more support for the Bolsheviks. They now had the majority of seats in Petrograd and Moscow. With 800,000 members and supporters including half the army and sailors at the naval base in Kronstadt, Lenin decided it was time for the revolution. He had to persuade the Mensheviks, Liberals and many of his own party that it was the right time. As you can see all the events up to the revolution were important. They do all seem to be connected. For example without the unhappiness of the peasants, Nicholas may never have had to abdicate, or without the Provisional Government not taking the peasants' wants and needs into account the Bolsheviks would never have been so popular. This makes it very difficult to pick out a main cause for the revolution. If you take one out the whole thing collapses. So I believe there was no major cause of the Bolshevik revolution, each cause was as important as the next. ?? ?? ?? ?? ...read more.