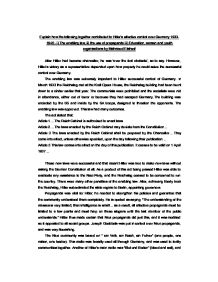 Explain how the following together contributed to Hitler's effective control over Germany 1933-1945:- i) The enabling law, ii) the use of propaganda iii) Education, women and youth organisations

Explain how the following together contributed to Hitler's effective control over Germany 1933-1945:- i) The enabling law, ii) the use of propaganda iii) Education, women and youth organisations by Mahmoud Elsherif After Hitler had become chancellor, he was 'over the first obstacle', so to say. However, Hitler's victory as a representative depended upon how properly he could seize the successful control over Germany. The enabling law was extremely important to Hitler successful control of Germany. In March 1933 the Reichstag met at the Kroll Opera House, the Reichstag building had been burnt down to a cinder earlier that year. The communists were prohibited and the socialists were not in attendance, either out of terror or because they had escaped Germany. The building was encircled by the SS and inside by the SA troops, designed to threaten the opponents. The enabling law was approved. This law had many outcomes. The act stated that: Article 1... The Reich Cabinet is authorised to enact laws. Article 2... The laws enacted by the Reich Cabinet may deviate from the Constitution... Article 3 The laws enacted by the Reich Cabinet shall be prepared by the Chancellor... They come into effect, unless otherwise specified, upon the day following their publication... Article 5 This law comes into effect on the day of this publication. It ceases to be valid on 1 April 1937... ...read more.

The Nazis manipulated the education system fully- the teachers, the pupils and the curriculum. Their original battle of changing the teachers to National Socialism was made easier for the Nazis as many teachers were already compassionate towards National Socialism. In 1933 membership of the NSDAP was required for civil servants and by 1936 36% of teachers were members. The Nazis got rid of the teachers, they considered 'undesirable', such as Jews and those with different opinion about Hitler and leaving the teaching career that is conquered by Nazis opinions and laws. While some didn't like this, the majority accepted the new ideas and the swapping of minds of their pupils to hate Jews. Jews were soon pressed out of the education system when, from 1933, universities were forced to bound the Jewish entrants to just 1.5.% of the student body. Jews were prohibited from the medical, dental and legal courses in 1934, and then in 1936 Jewish teachers were powerless to give any tuition, even to Aryan children. Finally, in 1938, Jews were expelled from all German schools. As I said before, that Hitler changed the courses, every classroom contained swastiska flags, propaganda and racist materials whilst Mein Kampf was vital classroom reading. Taken out from the book were often talked about and learned, therefore strengthen Hitler principles into the defenceless minds of the children. ...read more.

Hitler understood the need to fit in to a group, and he reacted not only by creating groups for adults and emphasising the 'Volk' but by also creating groups for children too. Hitler set up the 'Hitler Youth', a kind of 'club' that planned fun actions whilst tightly fitting the Nazi culture into young children. Within Hitler Youth were the Pimpfen (Little Fellows), for boys aged 6-10. They were taught military skills and were mind-swapped. Next, the Deutsches Jungvolk ( German Young People) was for boys aged 10-14. After that were the Hitler Jugend (Hitler Youth). For the girls was the Bund Deutscher Madel ( League of German Maidens). This was separated into two groups, the Jungamadel and Madelschaft. They did the same sort of activities as the boys but were more determined on household subjects. Many were lured by the appeal of uniform and learning arts, crafts, sports and camping. In 1936 all non-Nazi youth organisations were forbidden and membership of the Hitler Youth was made essential. Their slogan was "Fuhrer command-follow". The essential plan of the movement was to mind swap the children into the obedient approval of Nazi ideology. However, some young Germans did avoid joining the Hitler Youth and formed their own separatist groups. Hitler did manage to successful control Germany, but whilst giving the positive effect of a sense of National Unity, he destroyed education, equality and hearten a racialist community. The effects if Hitler's control of Germany were impressive and on a enormous magnitude. ...read more.