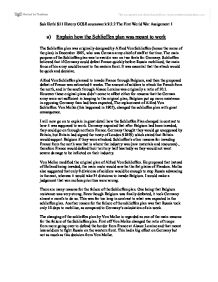 Explain how the Schlieffen plan was meant to work. How did it end up in stalemate?

a)        Explain how the Schlieffen plan was meant to work

The Schlieffen plan was originally designed by Alfred Von Schlieffen (hence the name of the plan) in December 1905, who was German army chief of staff at the time. The main purpose of the Schlieffen plan was to avoid a war on two fonts for Germany. Schlieffen believed that if Germany could defeat France quickly before Russia mobilised, the main force of his army could be sent to the eastern front. It was essential that the attack would be quick and decisive.

Alfred Von Schlieffen planned to invade France through Belgium, and then the proposed defeat of France was estimated 6 weeks. The amount of soldiers to attack the French from the north, and in the south through Alsace Loraine was originally a ratio of 10:1. However these original plans didn’t come to affect either for reasons that the German army were not sufficient in keeping to the original plan, Belgium put up more resistance in opposing Germany than had been expected, The replacement of Alfred Von Schlieffen: Von Molke (this happened in 1905), changed the schlieffen plan with great consequence.

I will now go on to explain in great detail how the Schlieffen Plan changed in contrast to how it was supposed to work. Germany expected that after Belgium had been invaded, they could go on through northern France. Germany thought they would go unopposed by Britain, but Britain had signed the treaty of London 91859) which stated that Britain would support Belgium if they were attacked. Schlieffen’s other reasons for invading France from the north was that is where the industry was (raw materials and resources) , therefore France would defend their territory half heartedly as they would not want severe damage to be inflicted on their industry.

Von Molke modified the original plan of Alfred Von Schlieffen. He proposed that instead of Holland being invaded, the main route would now be the flat plains of Flanders. Molke also suggested that only 8 divisions of soldiers would be enough to stop Russia advancing in the east, whereas it would take 34 divisions to invade Belgium. I would make a judgement that von molkes priorities were wrong.

The changing of the schlieffen plan by Von Molke is regarded as one of the main reasons for the failure of the Schlieffen plan. First off Von Molke changed the ratio of troops from more going over to defend the border from France at Alsace Loraine and that meant less soldiers to fight Russia on the western front. This had a big effect on Germany but not as much as this decision from Von Molke.

Von Molke decided that instead of going through two countries to get to their destination they would only go through Belgium. Belgium put up a very admirable resistance against Germany which halted the progress of the schlieffen plan. This may not have been the case if the original plan was kept in order, which suggested going through both Holland and Belgium.

In conclusion the Schlieffen plan ended up as a failure as the plan didn’t remain constant as many changes were made by Von Molke. This is arguably one of the key factors that encouraged the failure of the schlieffen plan.

B) The stalemate developed on the western front for numerous reasons. Firstly the Schlieffen plan failed because of the type of warfare used on the western front. The warfare used in the great world war was trench warfare. Both sides dug very deep into the trenches, Therefore the soldiers of both sides could fight at ground level. The trenches were also shaped into a zig zag so if the opposition invade they couldn’t just fire across, it would be more like a maze like experience. Each section of the trenches: from the reserve trench, support trench, communication and front line trench were surrounded by barbed wire making it increasingly difficult to get invaded.

Another reason why stalemate developed on the western front is the effect of artillery used in the war made it also very defensive. I say this because the methods of attack used in the war were weapons such as: the lee Enfield rifle, long range guns, poison gas, mines and the brief introduction of the tank. These weapons were used by both sides and therefore it came to no surprise that both countries found it difficult to break through the enemy trenches. Men could not advance due to artillery as they were continuously slaughtered. The artillery is also connected to Falkenhayn’s and his defensive strategy to be patient and gain land slowly via the ammunition used. Falkenhayns defensive strategy brought him into conflict with Hindenburg and Ludendorff who preferred a more offensive and outgoing method.

Another reason which contributed to the development of the stalemate on the western front was the failure of the tank. Lloyd George praised the tank after it was created and brandished it as “a war winning machine”. Many people shared this growing optimism towards the tank, one being Douglas Haig. Though the Tank received a good reception it hadn’t been tried and tested yet in warfare. When the tanks did experience warfare it did not live up to its high expectations. I say this because many tanks broke down before they reached their starting posts. Some tanks demobilised and were abandoned due to the rugged terrain. Altogether, the Tanks did not contribute to helping either side attain the advantage. Instead, often ran over the barbed and scattered it across no mans land and in the process made it harder for the soldiers to cross no mans land.

In conclusion, the stalemate on the western front mainly developed due to trench warfare, which was a defensive war where neither side could advance.