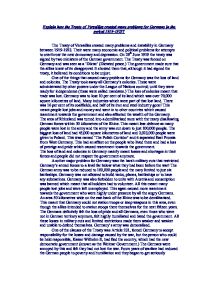 Explain how the Treaty of Versailles created many problems for Germany in the period 1919-1923?

Explain how the Treaty of Versailles created many problems for Germany in the period 1919-1923? The Treaty of Versailles created many problems and instability in Germany between 1919-1923. Their were many economic and political problems for attempts to overthrow the new democracy and depression. On 28th June 1919 the treaty was signed by two ministers of the German government. The Treaty was forced on Germany and was seen as a 'Diktat' (Dictated peace.) The government made sure that the allies knew of its disapproval. It showed them that, although it had signed the treaty, it believed its conditions to be unjust. One of the things that caused many problems for Germany was the loss of land and colonies. The Treaty took away all Germany's colonies. These were administrated by other powers under the League of Nations control; until they were ready for independence (these were called mandates.) The loss of colonies meant that trade was lost. Germany was to lose 10 per cent of its land which was over 70,000 square kilometres of land. Many industries which were part of that lost land. There was 16 per cent of its coalfields, and half of its iron and steel industry gone! ...read more.

The Weimar Government now hoped for a period of calm to allow the new constitution to be put in to operation. However no sooner had Kapp fled the Treaty ordered to pay reparations, which were fixed at a huge sum of �6600 million in 1921. The Germans somehow paid the first instalment of this huge bill in 1921. In 1922it was a different story. The Germans announced that they could not afford any payments for the next three years and this put on enormous strain on German economy. The French refused to believe this and invaded the Ruhr industrial region to take what they were owed. This invasion began on 9th January 1923. The determination of the French and Belgium soldiers was showed in the statistics. About 60,000 French and Belgium soldiers took control of every mine, factory, steelworks and railway in the region to make up for the missing payments. However from here things went badly wrong. Encouraged by their government, the German workers in the Ruhr staged a general strike against the French occupation. Industrial production collapsed, and the German economy suffered. The value of the mark fell rapidly. The only way the government could raised such large sums of money was to print huge numbers of banknotes. ...read more.

In March 1919 the communists organised riots and strikes in Berlin. Again the destructible Free Korps destroyed this opposition. The Weimar Republic was again threatened by the setting up of a Socialists Republic in Bavaria in November 1918 On 7th April 1919 it was made a Soviet Republic like Russia with Munich as its capital. Food, money and houses were taken from the rich and given to the workers. The people who lost food, money and houses were left on the streets and already showed hatred to the new government within months! The Weimar government had established its control of Germany by defending opposition with the help of Free Korps. All these problems were caused by the treaty and here on in Germany would be faced with more problems as I explained. The German people were already beginning to show frustration within months and this would surely increase in the years ahead. My conclusion is that all the political and economic problems were caused by the treaty. The people of Germany hated the treaty and government who signed it. The people of Germany did not want to go into this treaty however the government signed it. The people of Germany paid the consequences for their own government's mistakes and these problems led to the depression later on in Germany and the treaty led too all the problems and instability in Germany. By Harvey Bhachoo ...read more.