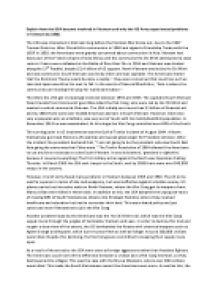 Explain how the USA became involved in Vietnam and why the US Army experienced problems in Vietnam by 1968.

Transfer-Encoding: chunked ﻿Explain how the USA became involved in Vietnam and why the US Army experienced problems in Vietnam by 1968. The USA was interested in Vietnam long before the Vietnam War broke out, due to the 1947 Truman Doctrine. After China fell to communism in 1949 and signed a Friendship Treaty with the USSR in 1950, the Americans were gravely concerned about communism in Asia. Vietnam had been part of the French empire of Indo-China until the communist Ho Chi Minh attempted to seize control. France were defeated at the Battle of Dien Bien Phu in 1954 and Vietnam was divided along the 17th Parallel, despite $1.4 billion of US support. North Vietnam was led by Ho Chi Minh and was communist. South Vietnam was led by Diem and was capitalist. The Americans feared that the Dominion Theory would become a reality ? they were concerned that countries such as Laos and Japan would be the next to fall. In the words of General MacArthur, ?Asia is where the communists are making their play for world domination.? Therefore the USA got increasingly involved between 1954 and 1965. ...read more.

This was a hated policy and just convinced more Vietnamese to join the Viet Cong. Another problem faced by the Americans was the Ho Chi Minh trail, which was the Viet Cong supply route through the jungles of Cambodia, Vietnam and Laos. In order to destroy this trail and to gain a clear view of the enemy, the US bombarded the forests with chemical weapons such as Agent Orange and Napalm, which burnt human flesh as well as foliage. Around 300,000 civilians were killed. Despite this bombing, the Viet Cong were committed to keeping their supply route open. As a result of these tactics the USA were seen as foreign aggressors rather than freedom fighters. The Americans could not tell the difference between a civilian and a Viet Cong member, so they destroyed entire villages. This was the case with the My Lai Massacre, where over 300 civilians were killed. This made the South Vietnamese resent the Americans even more. As well as this, the US troops were often young and inexperienced. By 1968 US morale was at an all-time low and drug abuse was rife. ...read more.

This allowed the Americans to withdraw without appearing to have been defeated. By 1971, the numbers of troops in the South reduced to 157,000. In his efforts to destroy the Ho Chi Minh trail Nixon began to bomb Cambodia and Laos. This expansion of the war was criticised internationally and only gained more support for the communists. Peace talks finally culminated in January 1973, when the USA and North Vietnam signed a cease fire. The US Army withdrew from the war. Soon after the North Vietnamese army attacked the South and in 1975 it recaptured Saigon. It was renamed Ho Chi Minh city, a name that remains to this day. The results of the Vietnam War were largely negative. 58,000 US troops died and over 300,000 were injured. The greatest casualties were the South Vietnamese citizens ? one million died. Many US veterans were mentally scarred. The USA?s domino theory was only partially correct. Cambodia and Laos fell to communism, but no other Asian country did. Vietnam was economically, socially and geographically wrecked by the war, and the USA also faced economic hardship after spending $120 billion on the war. The Vietnam War proved that a clever enemy could humble even a superpower. ...read more.