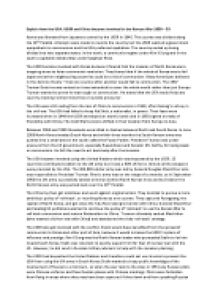 Explain how the USA, USSR and China became involved in the Korean War 1950 53

Transfer-Encoding: chunked ﻿Explain how the USA, USSR and China became involved in the Korean War 1950 ? 53 Korea was liberated from Japanese control by the USSR in 1945. The country was divided along the 38th Parallel. Attempts were made to reunite the country but the USSR wanted a government sympathetic to communism and the USA preferred capitalism. The country ended up being divided into two separate states: in the north, a communist regime under Kim Il Sung and in the south a capitalist dictatorship under Syngman Rhee. The USSR became involved with Korea because it feared that the invasion of North Korea was a stepping stone to Asian communist revolution. They feared that if the whole of Korea was to fall Japan and other neighbouring countries could be a risk of communism. Many Americans believed in the domino theory ? that one country after another would fall to communism. The 1947 Truman Doctrine was revised so it was extended to cover the whole world rather than just Europe. Truman wanted to prove he was tough on communism. He stated that the USA would help any country resisting ?armed minorities or outside pressures?. The USA were still reeling from the loss of China to communism in 1949, after Zedong?s victory in the civil war. ...read more.

Stalin would have benefited from the spread of communism to Korea and other part of Asia, because it would increase the USSR?s sphere of influence and prestige. Kim Il Sung was the North Korean leader who persuaded Stalin to let him invade South Korea. Stalin was reluctant to openly support him for fear of nuclear war with the US. However, he did send in Russian military advisors to help with the invasion planning. The USSR had boycotted the United Nations and therefore could not use its veto to prevent the USA from using the UN army in South Korea. Stalin wanted to keep public knowledge of the involvement of Russia to a minimum, so when the war took to the skies in 1951 any Russian pilots wore Chinese uniforms and flew Russian planes with Chinese markings. Pilots were forbidden from flying in areas where they may have been captured if shot down and from speaking Russian on the aircraft radio. For reasons of ethnicity, on the ground Soviet pilots 'played' the roles of Soviet commercial travellers rather than Chinese or North Korean soldiers. China got involved with the conflict because it was alarmed when North Korea was invaded in November 1950. ...read more.

The total death toll of all sides combined (including citizens) was over 2 million and the war became known as ?the century?s nastiest little war?. China?s gains included saving North Korea from capitalism and increasing its power as a leading Communist nation in Asia. North Korea remained communist which gave China protection from the US. Mao Zedong emerged from the war in a more secure position and the Friendship Pact with the USSR had proved useful, although tensions between the powers would soon reduce its influence. However, China had lost 550,000 in the war and this was especially costly for a new government. Relations between China and the US remained very tense and the US refused to recognise China as communist. China was represented at the UN by the nationalist controlled island of Taiwan. China was isolated in trade on politics. China?s actions were condemned by the UN which accused it of being aggressive. After 1953 China began to turn in on itself behind the so-called ?Bamboo Curtain?. Overall, the war accomplished little in terms of land. The two Koreas were still divided along the 38th Parallel. However, keeping communism at bay in Korea continues to benefit the west today, as we import mass amounts of Korean cars and electronic goods. The war officially never ended, either. A ceasefire was signed, however the nations are still technically at war. ...read more.