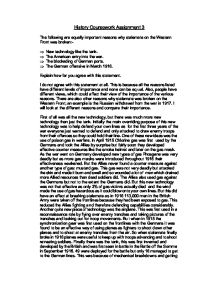 Explain that New technology like the tank helped win WW1

History Coursework Assignment 3 The following are equally important reasons why stalemate on the Western Front was broken:- ==> New technology like the tank. ==> The American entry into the war. ==> The blockading of German ports. ==> The German offensive in March 1918. Explain how far you agree with this statement. I do not agree with this statement at all. This is because all the reasons listed have different levels of importance and none can be equal. Also, people have different views, which could affect their view of the importance of the various reasons. There are also other reasons why stalemate was broken on the Western Front; an example is the Russian withdrawal from the war in 1917. I will look at the different reasons and compare their importance. First of all was all the new technology, but there was much more new technology than just the tank. Initially the main overriding purpose of this new technology was to help defend your own lines as for the first three years of the war everyone just wanted to defend and only attacked to draw enemy troops from their offences so they could hold their line. One of these new ideas was the use of poison gas in warfare. ...read more.

This was because of mechanical breakdowns and getting stuck in the mud in no-mans land. But this was successful enough to make the Allied High command order 1000 more tanks. This highlights the problem with these early tanks, they were very unreliable. But if they did reach their destination they could wreck the enemies morale as well as shoot them down. The Germans did not think the tank was worth developing until Hitler came to power in Germany in 1933. Secondly the American entry in the war in April 1917 did help to break the stalemate. There are a few reasons why they entered the war in the first place. One was the sinking of the passenger liner in 1915 going from Britain to the US. It was sunk by a German U-boat and became a symbol and reason why the US joined the war in 1917 even though it had happened two years previous. Another reason is the "Zimmerman Telegram" which was sent from the Foreign Secretary of the German Empire, Arthur Zimmermann, on January 16, 1917, to the German ambassador in the United States of America, Johann von Bernstorff this was intercepted by British code breakers. Once decrypted it was found to contain an request to Mexico to make war with the US over the territory it lost in the Mexican-American war. ...read more.

Then the army advanced eight kilometres on the first day and came within 60 kilometres of Paris by late May. But at this point the Germans suffered a shortage of ammunition and food as they moved faster than their supplies. So by late July the Allies launched a counter offensive which was the beginning of the end of WWI. Also there is another rather important reason why stalemate was broken and also how Germany was able to launch its offensive in spring 1918. This was the withdrawal of Russia from the war in March 1918. This meant that troops who had been stuck on the Eastern Front were now free to go to the Western Front to bolster the German forces there. This as I said lead to the offensive which resulted in the end of stalemate on the Western Front. Overall I think that the blockade of German ports is the most important reason for stalemate ending because this lead to supply shortages for the army and when they were needed in the 1918 spring offensive they were not there and this signalled the end of stalemate. But the other reasons are also important as they put pressure on both sides to do something other than defend. As both sides had more troops than ever on the Western front in Spring 1918 and the Germans did eventually attack. ...read more.