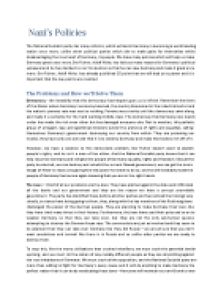 Explain the appeal of Nazi policies.

﻿Nazi?s Policies The National Socialist party has many reforms, which will assist Germany in becoming a world leading nation once more, unlike other political parties which aim to make gains for themselves whilst disadvantaging the true heart of Germany, its people. We have many policies which will help us make Germany great once more, Der Fuhrer, Adolf Hitler, has laid out many reasons for Germany?s political upheaval and he has decided to run for election so that he can save Germany and make it great once more. Der Fuhrer, Adolf Hitler, has already published 25 point that we will lead us to power and it is important that the key points are revisited The Problems and How we?ll Solve Them Democracy - the instability that this democracy has heaped upon us is infinite. Remember the times of the Kaiser where Germany?s economy boomed, the country blossomed in the industrial sector and the nation?s poverty rate was next to nothing. Poverty was a rarity until the democracy came along and made it a certainty for the hard working middle class. The democracy that Germany now stands under has made the rich even richer but has damaged everyone else. Not to mention, this pathetic group of arrogant, lazy and egotistical dictators (under the pretence of rights and equality), calling themselves Germany?s government destroying our country from within. They are poisoning our insides, they have only one aim and that it is to destroy Germany and make themselves rich off of it. ...read more.

And by eliminating the Jews, the government and the Allies we will make Germany as great as it should?ve been all these years. Heil Hitler Hitler, the greatest leader of all history is the leader of our party. He leads us in his stride, allowing us to be his followers. We are honoured to serve this great man, you should join us in our conquest with Hitler to gain power. Throughout this booklet, we will show you the great plans Hitler has for his people; including Economic policies, and Nazi beliefs. Why is Hitler the man to go with? I'll tell you why. Hitler is an almighty speaker. He'll take your heart with words and destroy his opponents with them too. Hitler foresaw the depression that we are now going through. He knew that those lying American Jews were going to do all they could to destroy us, but if you join Hitler we will show them who's the boss in this world! Hitler is a kind gentleman, a heroic leader. Throughout his life he has strived to achieve, and with your help we can all achieve our similar goals. Hitler's views Hitler is one of those guys that can be ferocious and gentle. You get on the bad side of him and you'll be sorry. You get on the good side you won't regret it. We need a leader like this. ...read more.

As German citizen, you all are Aryans, and you may find yourself wondering, ‘what are Aryans?’, and the answer to your question is simply Aryans are the superior race, which hold the right to use this earth as their domain, however we have all failed our duties. We have failed to protect this planet from foreign, illegal invaders, who as you might already know as to be the Jews. We will give their land to their rightful owners, giving us Lebensraum. Our gift to the people There is to be no more industrial conflict, when Heir Hitler is to be in power, as he will revive Germany, but not by bringing it back to its glory days (before WW1), but he will create a time where everyone will forget about the mess that the Reichstag had created, and everyone in Germany will live in prosperity. The Führer will also rearm Germany, and bring back the defenses, which will startle all of the other countries throughout the world. The Führer will bring back employment for everyone, whether you be old or young, a job will be there waiting for you, when you need it most. The farmers will also gain support when voting for Hitler, as he will bring you sales, alongside an abundance of benefits. Autobahns will be created, the biggest in the world, and Germany will be a country to be marveled at. Once Hitler is in power, you will be startled as to why you had every listened to the Jewish rubbish, and the jealous jeers exclaimed by other countries and Jews. ...read more.