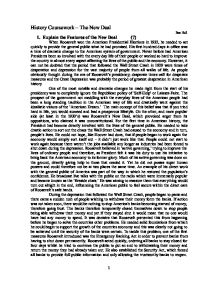 Explain the Features of the New Deal - Roosevelt and the American Presidential Election 1932.

History Coursework - The New Deal Ben Hall 1. Explain the Features of the New Deal (7) When Roosevelt won the American Presidential Elections in 1932, he needed to act quickly to provide the general public what he had promised. His first hundred days in office was a time of dramatic change to the American system of government. Never before had American Presidents been so involved with the every day life of their people or worked so hard to improve the country in almost every aspect affecting the lives of the public and the economy. However, it can not be doubted that the period that followed the Wall Street Crash in 1929 were times of desperation and depression for the vast majority of people from all walks of life. As people obviously thought during the era of Roosevelt's presidency; desperate times call for desperate measures and the Great Depression was probably the period of greatest desperation in American history One of the most notable and dramatic changes he made right from the start of his presidency was to completely ignore the Republican policy of 'Self-Help' or Laissez-Faire. The prospect of the government not meddling with the everyday lives of the American people had been a long standing tradition in the American way of life and drastically went against the idealistic visions of the 'American Dream.' The main concept of this belief was that if you tried hard in life, you would succeed and lead a prosperous lifestyle. On the other, and more popular side (at least in the 1930's) was Roosevelt's New Deal, which provoked anger from its oppositions, who claimed it was unconstitutional. For the first time in American history, the President had become directly involved with the lives of the general public. He needed to take drastic action to sort out the chaos the Wall Street Crash had caused to the economy and in turn, people's lives. ...read more.

Unless Roosevelt had acted quickly, so many Americans would have found themselves living on the streets, after being unable to keep up with their mortgage payments. By introducing the New Deal he gave these people a lifeline, allowing them to rearrange their mortgages in order to cope with their temporary unemployment or financial crises. After share prices collapsed, the money that had been supporting some of the USA's biggest industries simply disappeared. Stocks in these industries sunk to an insignificant low and could no longer provide the financial backing that these companies needed in order to keep operating in the same manner. This meant that employers had to start cutting the spending budget in order to keep making a profit and therefore were forced to start sacking their workers. Many companies were forced to shut down altogether resulting in a great loss of jobs. This sudden boom in unemployment had to be dealt with and is in turn part of the reason behind the introduction of the New Deal. Yet another thing that Roosevelt wanted to ensure when he was in office, was the security of workers rights so this could not happen on such a vast scale again. When the workers eventually went back to work they wanted to feel protected so that they could work without fear of being sacked. They also wanted the rights that nowadays most employees take for granted and to give them all this, they needed Trade Unions to be set up. Up until 1935 and the introduction of the Wagner Act employers could simply say that they didn't want for any of their workers to be members of such unions and could sack them if they joined. But with the 'Second New Deal,' came their rights to become members without the worry of expulsion or such like. Probably the worst hit industry in America as a result of the Wall Street Crash was agriculture. ...read more.

Millions supported the radical, Huey Long's, 'Share Our Wealth' scheme, which went to show that people were still feeling that Roosevelt had still not done enough to bring America completely free from the Depression. In reality, Roosevelt would have started to find himself in difficulties if it were not for the outbreak of another world war. This provided millions of jobs for the unemployed and is why many people believe it was the war, and not Roosevelt who ultimately solved America's unemployment problem. Roosevelt could not have afforded to keep agencies such as the CCC going, on such a large scale for a much longer period of time and yet as soon as he stopped spending, unemployment levels would have shot straight back up. Nevertheless, I feel that to say the New Deal was a failure would certainly be an unjust statement. Of course it was not a complete success, but then again not much in life is. Had Hoover stated in power, America's road to recovery would have taken a much longer route, full of twists and turns. Roosevelt offered a shortcut, and although there may have opposition to it at the time, I feel that not many people now would choose to criticize it. By actively getting involved with the economy, he rescued it from the brink of disaster, and whilst he did not manage to lift it back onto the plateau of prosperity, it would have taken superhuman strength to do so. This is portrayed by the fact that he served three Presidential terms, with each election winning by an overwhelming majority and so was clearly held in high esteem by the people of America. That is why I do not deny the fact that the New Deal was not a complete success and yet I feel I would struggle to find anyone who would not say it was successful in comparison to what Hoover would have done (bearing in mind this would have been nothing) had he stayed in power. 1 ...read more.