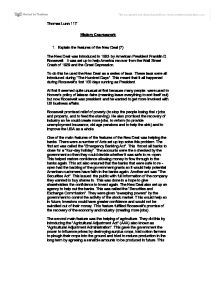 Explain the features of the New Deal.

History Coursework 1. Explain the features of the New Deal (7) The New Deal was introduced in 1933 by American President Franklin D. Roosevelt. It was set up to help America recover from the Wall Street Crash of 1929 and the Great Depression. To do this he used the New Deal as a series of laws. These laws were all introduced during "The Hundred Days". This meant that it all happened during Roosevelt's first 100 days running as President. At first it seemed quite unusual at first because many people were used to Hoover's policy of laissez-faire (meaning leave everything to sort itself out) but now Roosevelt was president and he wanted to get more involved with US business affairs. Roosevelt promised relief of poverty (to stop the people losing their jobs and property, and to feed the starving). He also promised the recovery of industry so he could create more jobs, to reform (to provide unemployment insurance, old age pensions and to help the sick) and to improve the USA as a whole. One of the main features of the features of the New Deal was helping the banks. There were a number of Acts set up top solve this problem. The first act was called the "Emergency Banking Act". This forced all banks to close for a "four-day holiday". The accounts were then checked by the government so then they could decide whether it was safe to re-open. ...read more.

In this act workers were given the right to collective bargaining of wages and were given an enormous boost in trade unions which would now organise in industries where they had previously been excluded. This Act fulfilled the promise; the recovery of industry so he could create more jobs. The New Deal also helped Home-Owners in the "Home-Owners Loan Compensation" (HOLC). This gave a low interest rate loans to home-owners. These loans would enable home-owners to adjust mortgage repayments in order to cope with temporary unemployment. This act was drawn up so then families didn't have to lose their homes. This referred to Roosevelt's aims; relief of poverty (to stop the people losing their jobs and property, and to feed the starving) and to improve the USA as a whole. Finally the New Deal helped the depressed areas of America. It did this by introducing the "Tennessee Valley Authority" (TVA). This was set up to regenerate the area in its industry and agriculture. It planned to tame the Tennessee River by conducting a series of dams to generate hydroelectricity as well as encouraging activities within the area on the new lakes. This feature of the New Deal related to Roosevelt's aim of improving the USA as a whole. In conclusion, all of the main features of the New Deal referred to Roosevelt's main aims. These were also known as the "Alphabet Agencies". These were set up to carry out work from the New Deal to help deal with employment and support. ...read more.

There are many views on the New Deal. Some thought that it brought success, whereas others thought it was a failure. Many historians believe it was a success because even though it did not solve unemployment, it did reduce it and helped most Americans get back on track after the Depression. The others thought it was a failure because it did not completely solve unemployment or prevent poverty. The New Deal was a success because it helped many groups of people sort out their lives. One group it helped was the workers. The New Deal helped the workers by setting up the NRA which tried to regulate the working conditions. During the 1930's the membership of Trade Unions rose and during 1937 there were 4700 strikes with over 80% of them going in favour settling in favour of the workers. All these successes are down to the New Deal. The New Deal also helped the farmers because of the various acts the New Deal introduced. It made their lives better it helped solve the problem of over-production by giving money for the surplus crops. The New Deal also encouraged conservation and provided loans for farming equipment and to pay for the property so the farmers were not evicted. The final group it helped was the poor. It did this by introducing Emergency Relief which prevented people from starving by providing jobs for those who were unemployed. The other act it introduced was the Social Security Act which began to set up a system of international insurance. In conclusion, the New Deal produced many successes especially for the workers, farmers and the poor. Thomas Lunn 11T ...read more.