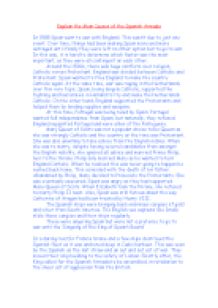 Explain the Main Causes of the Spanish Armada

﻿Explain the Main Causes of the Spanish Armada In 1588 Spain went to war with England. This wasn?t due to just one event. Over time, things had been making Spain more and more outraged until finally they were left no other option but to go to war. In this way, it is hard to determine which factor was the most important, as they were all contingent on each other. Around the 1500s, there was huge conflicts over religion, Catholic verses Protestant. England was divided between Catholic and Protestant. Spain wanted to free England to make the country Catholic again. ...read more.

She was also unwilling to take advice from the English nobles. When she was to marry, despite having several candidates from amongst the English nobility, she ignored all advice and married Prince Philip, heir to the throne. Philip only married Mary as he wanted to turn England Catholic. When he realised this was never going to happen he rushed back home. This coincided with the death of his father. Abandoned by Philip, Mary decided to Prosecute the Protestants. She was eventually executed. Spain was angry as they had supported Mary Queen of Scots. When Elizabeth took the throne, she refused to marry Philip II next. ...read more.

This was seen by the Spanish as the last straw and an out and out act of war. They moved their ship building to the safety of Lisbon. Shortly after, the King called for the Spanish Armada to be assembled, in retaliation to the sheer act of aggression from the British. From this essay you can see the reasons why the Spanish Armada occurred. The ?Singeing of the King of Spain?s Beard? was known as the trigger event as it was the very thing that pushed Spain over the edge. However, the religious conflict in England was probably the most significant of the causes of the Spanish Armada in terms of fostering Spanish anger. ...read more.