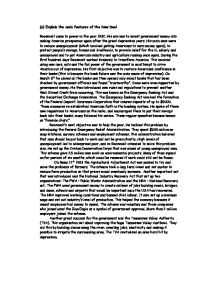 Explain the main features of the New Deal.

(a) Explain the main features of the New Deal Roosevelt came to power in the year 1932. His aim was to invest government money into making America prosperous again after the great depression years. His main aims were to reduce unemployment (which involved getting Americans to earn money again), to protect people's savings, homes and livelihoods, to provide relief for the ill, elderly and unemployed and to get American industry and agriculture running once again. During the first hundred days Roosevelt worked tirelessly to transform America. This involved using new laws, acts and the full power of the government in an attempt to drive America out of depression. His first objective was to restore Americans confidence in their banks (this is because the bank failure was the main cause of depression). On March 5th he closed all the banks and then opened only select banks that had been checked by government officials and found "trustworthy". Some were even supported by government money. He then introduced new rules and regulations to prevent another Wall Street Crash from occurring. This was known as the Emergency Banking Act and the Securities Exchange Commission. ...read more.

As a result of the lack of money less people were buying clothes so many textile workers lost their jobs whilst their companies went bust. Other companies began overproducing and people could not afford the products and so the companies kept going bankrupt - a vicious circle. These problems led to people losing their faith in industries. Mortgages and repayments could not be met, so people were moving to shantytowns. Even people who once had expensive cars etc now had nothing, and were even unable to pay for bus fare. Farmers suffered the most. Thousands of families who farmed had to sell their land, as it became uneconomical to grow crops. Millions of farmers went to live in the big cities looking for work. America's foreign trade value dropped from $9 billion to $3 billion whilst other countries retaliated against US import tariffs. One result of this meant that share values changed dramatically, for example, the shares of union cigar fell from $113 each to just $4. Many people blamed the depression on Hoover as he and the government believed they should not interfere in the economy or with companies' etc. ...read more.

removed 59 corrupt officials from the labour department. This restored the American's faith in their government. On the other hand, there is a lot of evidence that suggests the New Deal was not successful. Although unemployment rates had dropped, there were still six million unemployed that found it impossible to find jobs until the USA entered the war - only then was an end put to unemployment. Also, even though black Americans were now able to receive benefits, there were no laws against the lynching of black Americans so they either got no work or received worse wages/treatment than white people did. Most of the New Deal programmes were aimed to help male manual workers (only 8000 women were involved in the Civilian Conservation Corps.) The US economy took longer to recover than most European countries which meant that confidence in Americans was low, in the 1930's they only spent and invested 75% of what they had before the depression. Finally, when Roosevelt cut the New Deal budget in 1937 the country went straight back into recession. In conclusion, I agree with the statement to a certain extent however, the amount of jobs the New Deal created, and the stability it brought the banking system is credible. Therefore I agree with the statement about 75%. ...read more.