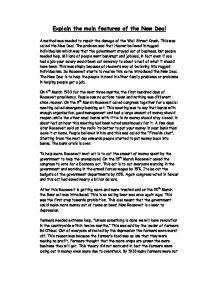 Explain the main features of the New Deal A method was needed to repair the damage of the Wall Street Crash. This was called the New Deal. The problem was that Hoover believed in rugged individualism which was that the government stayed out of business, but people needed help. Millions of people went bankrupt and jobless, in fact even if you had a job your salary would been cut severely to about a half of what it should have been. This was simply because of Hoover's way of believing into rugged individualism. So Roosevelt starts to realise this so he introduced the New Deal. The New Deal is to help the people in need in either family problems or problems in helping people get a job. On 4th March 1933 for the next three months, the first hundred days of Roosevelt presidency. People saw no actions taken and nothing was different since Hoover. On the 9th March Roosevelt called congress together for a special meeting called emergency banking act. This meeting was to say that banks with enough organisation, good management and had a large amount of money should reopen, while the other small banks with little to no money should stay closed, in about half an hour this meeting had been voted unanimously for it. ...read more.

To solve this problem Roosevelt instructed Henry Wallace the secretary of agriculture to find a way for the farmers to gain money. On 12th May 1933 the Agricultural Adjustment Administration (AAA) is introduced. The plan that they came up with is so that the farmers grow less crops so less stock needs to be made so therefore the prices on the market increases. The government also influenced the farmers to sell all their crops to them so the government could burn it. So the farmers made more money. Also the government bought all the farmers pigs to slaughter and to be canned so the unemployed could have it. This raised the money the farmers made even more, even though this was good news for the farmers a lot of people said this was a disgrace and this should not be done. This had some bad consequences as the people who worked for the farmers known as sharecroppers has been made jobless as there is no longer any work for them to do. This created a mass amount of 1.5 million sharecroppers became jobless and had to look for work elsewhere. America has long standing agriculture problems one of those beings the "Dust Bowls" which is flat grassland long since ploughed to grow. ...read more.

Roosevelt failed to realise that he failed the promise he made in 1933, which was to give everyone work. This speech was taken from a book named "Down and out in the great depression" a complaint made by a unemployed man to Roosevelt "You promised us work. Give it to us now. We waited long enough." In 1934 a 6000 men strong mob marched to Roosevelt all requesting one thing. A job. Roosevelt had 3 opposition. Charles Coughlin, Francis Townsend and Huey Long. Charles Coughlin was a Canadian priest. His plan was to nationalise banks and to introduce a minimum annual wage. Francis Townsend is planning to pat pensioners $200 a month to every American over 60. In return they had to retire at 60 and spend their $200 in the month. This way more space is free for younger people to work. This also gives pensioners money to buy products so there is more demand. Huey Long he was the most dangerous opposition to Roosevelt because he said if he took over Roosevelt's place he would confiscate any people with over $3 million and give it to every American this sum is looking for around $4000 till $5000. Roosevelt saw this coming and he did not have enough strength to win this so he introduced the second New Deal. ...read more.