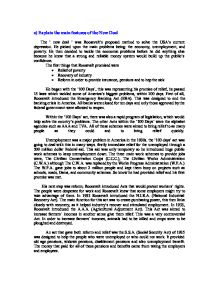 a) Explain the main features of the New Deal The ' new deal ' was Roosevelt's proposed method to solve the USA's current depression. He picked upon the main problems being: the economy, unemployment, and poverty. He then decided to tackle the economic problems before he did anything else because he knew that a strong and reliable money system would build up the public's confidence. The first things that Roosevelt promised were * Relief of poverty * Recovery of industry * Reform in order to provide insurance, pensions and to hep the sick He began with the '100 Days�, this was representing his promise of relief, he passed 15 laws which tackled some of America's biggest problems, within 100 days. First of all, Roosevelt introduced the Emergency Banking Act (EBA). This was designed to end the banking crisis in America. All banks were closed for ten days and only those approved by the federal government were allowed to reopen. Within the '100 Days� act, there was also a rapid program of legislation, which would help solve the country's problems. The other Acts within the '100 Days� were the alphabet agencies such as AAA and TVA. All of these schemes were aimed to bring relief to as many people as they could and to bring relief quickly. ...read more.

c) 'The new deal was not a complete success'. Explain how far you agree with this statement. I can fully agree with the statement that 'the new deal was not a complete success'. This is because nothing when it comes to politics is ever a complete success, so the new deal like everything in this world will have its pros and cons. The whole point of the new deal was to allow America to fully recover after the Depression and make adjustments along the way. Did it deal with the depression or just postpone it? To begin with Unemployment figures were down in the mid-1930s but they shot up again in 1938, which showed that Roosevelt's solution was not permanent. However, unemployment went back down in 1940 because there was a great demand for war goods due to the problems arising in Europe. The unemployment fell from 25% to 14% in 1939; the New Deal had found jobs for 11% of the population this would mean that there were fewer jobs to find for the 13% still unemployed. Also Roosevelt would now be able to put more taxes on consumer goods e.g. Fridges and Cookers so that the government would get back some of the billions of dollars they had stuck into the New Deal. Regardless of this the first New Deal was made unconstitutional making the rate of unemployment rise between the years of 1937-39 from 14% to 18%, which brought less money into the American Government. ...read more.

It was this money spending and taxation that created the problems for Roosevelt when it came to opposistion. Many rich Americans were unhappy about paying for the new deal through increased tax. The traditional republicans opposed the way that the very business valuses of America were being undermined by helping the poor. So I can make the judgement that the new deal was not wholly successful, as it didn not fulfil its main aim ' to end the depression'. It was agreed that the new deal was successful in improving the morale and standard of living in the amreican people. Although it did not prevent it did preserve the USA from sinking lower into poverty. In the short term it gave people small jobs and trust in the American economy but in the long term the deal would only work with continual support which remained necessary untill the Second World War. Only decided societies such as the very poor factory workers the elderly and widows benefited from the deal and if something is going to be a complete success everything should be dealt with equally. Where as the poorest in America were not dealt with such as the migrant workers and unskilled workers. As I have said already a main aim of the New Deal was to restore confidence in that was lost in the 1020's, but by 1937 Americans were still only spending and investing about 75 percent of what they had in 1929. ...read more.