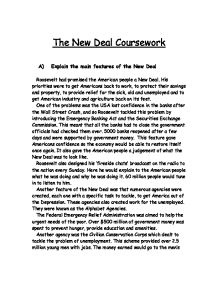 The New Deal Coursework A) Explain the main features of the New Deal Roosevelt had promised the American people a New Deal. His priorities were to get Americans back to work, to protect their savings and property, to provide relief for the sick, old and unemployed and to get American industry and agriculture back on its feet. One of the problems was the USA lost confidence in the banks after the Wall Street Crash, and so Roosevelt tackled this problem by introducing the Emergency Banking Act and the Securities Exchange Commission. This meant that all the banks had to close the government officials had checked them over. 5000 banks reopened after a few days and were supported by government money. This feature gave Americans confidence so the economy would be able to restore itself once again. It also gave the American people a judgement of what the New Deal was to look like. Roosevelt also designed his 'fireside chats' broadcast on the radio to the nation every Sunday. Here he would explain to the American people what he was doing and why he was doing it. 60 million people would tune in to listen to him. Another feature of the New Deal was that numerous agencies were created, each one with a specific task to tackle, to get America out of the Depression. ...read more.

The New Deal was designed to get America back on its feet economically and to raise the general morale of the American people. Roosevelt needed to take immediate action. He needed to be seen doing something as the American people were relying on him. Unemployment was increasing to high level at 14 million in 1933. Roosevelt and the government had to do something to tackle the problem and the New Deal seemed to be the perfect opportunity. At first the American industry seemed to be prosperous, in the 1920s and so the factories started producing more goods. Other countries had put tariffs on American goods so they could not be sold abroad and the only way to make a profit was to sell them expensive. Shares were being held at a low price as the factories did not sell as many goods. When the demand for goods began to fall, workers' wages were cut and some workers became unemployed, which meant that they could no longer afford to buy the new consumer goods. The factories then had to be shut down. This caused many problems. Banks soon went bankrupt and had to close down too as many people loaned out huge sum which, in the end, could not afford to pay back. ...read more.

This caused problems for Roosevelt, as it was him who passed the law saying workers in the trade had the right to strike and not get sacked. However, the New Deal did have some successes. Unemployment did fall from a huge scale. The alphabet agencies did bring needed work and supported millions of Americans. The American people thought that the New Deal was a success as Roosevelt was re-elected again in 1936. The New Deal gave the American public faith in the new government. The old government run by Herbert Hoover did nothing to help the American people recover from the depression so when Roosevelt came along with these ideas, the public were very welcoming towards them. The successes the government had in employment also gave the public more faith and trust with whatever the laws the government introduced. Roosevelt still had America's support behind him. Roosevelt gave back America's hope, self-esteem and self-confidence, and moral: he learned the most important factor of his success was to gain the trust of the American people. He became popular with his 'fireside chats'. Overall, the New Deal was not a failure, but it was not a success either. The economy did however recover and most American's morale and confidence had been restored. Roosevelt had used some good tactics and used his best intentions as it got him re-elected. ...read more.