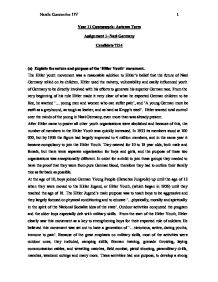 Explain the nature and purpose of the 'Hitler Youth' movement.

Year 11 Coursework- Autumn Term Assignment 1- Nazi Germany Candidate 7214 (a) Explain the nature and purpose of the 'Hitler Youth' movement. The Hitler youth movement was a reasonable addition to Hitler's belief that the future of Nazi Germany relied on its children. Hitler used the naivety, vulnerability and easily influenced youth of Germany to be directly involved with his efforts to generate his superior German race. From the very beginning of his rule Hitler made it very clear of what he expected German children to be like, he wanted '... young men and women who can suffer pain', and 'A young German must be swift as a greyhound, as tough as leather, and as hard as Krupp's steel'. Hitler wanted total control over the minds of the young in Nazi Germany, even more than was already present. After Hitler came to power all other youth organisations were abolished and because of this, the number of members in the Hitler Youth was quickly increased. In 1933 its members stood at 100 000, but by 1936 the figure had largely improved to 4 million members, and in the same year it became compulsory to join the Hitler Youth. They catered for 10 to 18 year olds, both male and female, but there were separate organisation for boys and girls, and the purpose of these two organisations was exceptionally different. In order for a child to join these groups they needed to have the proof that they were from pure German blood, therefore they had to outline their family tree as far back as possible. ...read more.

Hitler wanted to undoubtedly build up the master race and therefore came to the conclusion that women should be sacked from the jobs and commit their lives to the three K's ' kinder, kuche, kirche' ('children, kitchen and church'). One of the pillars of the Nazi thinking was developing pure race Aryans and so a policy introduced was that women could only marry purely racial men because this would lead to Aryan babies to be created and therefore was largely encouraged, even if the women were not married. Hitler also supposed that if women became house wives and were at home when soldiers came back from the upcoming war they would create social security for them leading to content cared for returns thus raising their spirits and making them happy to return. All of these policies stood towards women because Hitler believed in the ideological view of a woman's role. The Nazis wanted to fulfil some of their objectives such as a racially pure Germany, a '1000 year Reich', more soldiers and mothers, a more powerful Germany and lebensraum, and all these mainly revolved around the next generation of Germany which would solitarily come about by women becoming mothers. Consequently the Nazis needed to introduce all these policies towards women to enslave them into revolving their lives around their husbands, children and homes. As well as playing as integral part in achieving this goal, Hitler believed it did not stop there, but not only did women have to have children they also had to bring them up in the most National Socialist way. ...read more.

The only group that openly opposed the Nazis was the minority belonging to the churches; however nothing could be done to stop them as Hitler was in no way willing to risk loosing millions of religious people's support. The underground opposition of the Nazis was widely spread as people undoubtedly preferred to oppose the Nazi regime secretively rather that having a risk of getting killed. People even organised an operation to send leaflets through letters boxes to addresses chosen at random from directories. They did this 'passive resistance' at night in order to greatly reduce there chances of getting caught. There was also an open opposition coming from the Jews and gypsies after Hitler's opinion of them was made clear, but these groups were dealt with by genocide actions. To conclude I believe the most important reason why there was little opposition in Nazi Germany, was due to both propaganda and fear. Propaganda successfully worked as it operated on such a large scale. Ruling every part of human livelihood such as the media made it exceptionally difficult to disregard anything that was being said and forming your own opinion was not easy. The chance of getting killed or having to live through ongoing suffering in a concentration camp was something that people obviously tried to avoid. So, there was a lot of opposition of the Nazi regime but all on an underground, secretive level. There was no organised antagonism due to the trepidation of the Gestapo and SS and thus a very small known minority openly opposed the Nazi regime. ...read more.