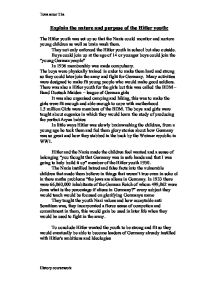 Explain the nature and purpose of the Hitler youth:

Explain the nature and purpose of the Hitler youth:

The Hitler youth was set up so that the Nazis could monitor and nurture young children as well as brain wash them.

They not only enforced the Hitler youth in school but also outside.

In 1936 membership was made compulsory.

The boys were physically trained in order to make them hard and strong so they could later join the army and fight for Germany. Many activities were designed to make fit young people who would make good soldiers.

It was also organised camping and hiking, this was to make the girls were fit enough and able enough to cope with motherhood

1.5 million Girls were members of the BDM. The boys and girls were taught about eugenics in which they would learn the study of producing the perfect Aryan babies

In little ways Hitler was slowly brainwashing the children, from a young age he took them and fed them glory stories about how Germany was so great and how they stabbed in the back by the Weimar republic in WW1.

Hitler and the Nazis made the children feel wanted and a sense of belonging “you thought that Germany was in safe hands and that I was going to help build it up” member of the Hitler youth 1930.

The Nazis instilled hatred and false facts into the vulnerable children that made them believe in things that weren’t true even in school in there maths problems “the jews are aliens in Germany. In 1933 there were 66,060,000 inhabitants of the German Reich of whom 499,862 were Jews what is the percentage if aliens in Germany?” every subject they would teach would be focused on glorifying Germanys name

They taught the youth Nazi values and how acceptable anti Semitism was, they incorporated a fierce sense of competion and commitment in them, this would gain be used in later life when they would be used to fight in the army.