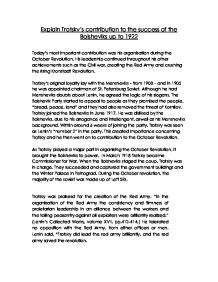 Today’s most important contribution was his organisation during the October Revolution. His leadership continued throughout his other achievements such as the Civil war, creating the Red Army and crushing the rising Kronstadt Revolution.

Trotsky’s original loyalty lay with the Mensheviks - from 1903 – and in 1905 he was appointed chairman of St. Petersburg Soviet. Although he had Mensheviks doubts about Lenin, he agreed the logic of his slogans. The Bolshevik Party started to appeal to people as they promised the people, “bread, peace, land” and they had also removed the threat of Kornilov. Trotsky joined the Bolsheviks in June 1917. He was disliked by the Bolsheviks, due to his arrogance and intellengent, aswell as his Mensheviks background. Within around 6 weeks of joining the party, Trotsky was seen as Lenin’s “number 2” in the party. This created importance concerning Trotsky and he then went on to contribution to the October Revolution.

As Trotsky played a major part in organising the October Revolution, it brought the Bolsheviks to power.  In March 1918 Trotsky became Commissioner for War. When the Bolsheviks staged the coup, Trotsky was in charge. They succeeded and captured the government buildings and the Winter Palace in Petrograd. During the October revolution, the majority of the soviet was made up of Left SRs.

Trotsky was praisesd for the creation of the Red Army. “in the organization of the Red Army the consistency and firmness of proletarian leadership in an alliance between the workers and the toiling peasantry against all exploiters were brilliantly realized.” (Lenin’s Collected Works, volume XVII, pp.412-414.) He tolerated no opposition with the Red Army, from either officers or men. Lenin said, “Trotsky did lead the red army brilliantly, and the red army saved the revolution.

The kronstadt appeared as the unsuccessful rising of Soviet sailors, soldiers and civilians led by Stepan Petrichenko. The rising was already an unruly affair, this made it easy for the Provisional government to crush them. Though not clear who started the rising – 3-6th July – Lenin had declared a month previous that the Bolshevik party was ready to take power, but delegates said this was a general intention. Trotsky, after, referred to the rising as a “semi-insurrection” and claimed it had been started by the Mensheviks. He did this to release the blame from the Bolsheviks. After the rising, the Bolshevik party was still far from being the revolutionary party and the opposition movement was disunited.

The civil war had an effect on everybody, but it affected the Bolsheviks greatly. Fortunately most effects were positive, such as toughness. The war had created obedience and loyalty within the force. The war had seemed to shape the Bolsheviks; they became more authorized and centralized.

Overall, Trotsky was a great impact upon the party and succeeded in helping them acomplish their plans.