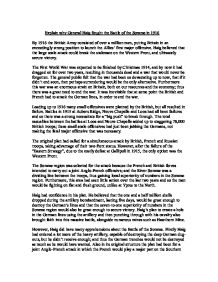 By 1916 the British Army consisted of over a million men, putting Britain in an exceedingly strong position to launch the Allies’ first major offensive. Haig believed that the large scale attack could break the stalemate on the Western Front, and ultimately secure victory.

The First World War was expected to be finished by Christmas 1914, and by now it had dragged on for over two years, resulting in thousands dead and a war that would never be forgotten. The general public felt that the war had been so devastating up to now, that if it didn’t end soon, then perhaps surrendering would be the only alternative. Furthermore this war was an enormous strain on Britain, both on our resources and the economy; thus there was a great need to end the war. It was inevitable that at some point the British and French had to attack the German lines, in order to end the war.

Leading up to 1916 many small offensives were planned by the British, but all resulted in failure. Battles in 1915 at Aubers Ridge, Neuve Chapelle and Loos had all been failures and so there was a strong necessitate for a “big push” to break through. The total casualties between the battles at Loos and Neuve Chapelle added up to staggering 78,000 British troops; these small scale offensives had just been jabbing the Germans, not making the fatal major offensive that was necessary.

The original plan had called for a simultaneous attack by British, French and Russian troops, taking advantage of their two-front status. However, after the failure of the “Eastern Strategy”, due to the costly defeat at Gallipoli in 1915, the only option was the Western Front.

The Somme region was selected for the attack because the French and British forces intended to carry out a joint Anglo-French offensive; and the River Somme was a dividing line between the troops, thus gaining local superiority of numbers in the Somme region. Furthermore, this area had seen little action over the last two years and so the men would be fighting on flat and fresh ground, unlike at Ypres to the North.

Haig had confidence in his plan. He believed that the one and a half million shells dropped during the artillery bombardment, lasting five days, would be great enough to destroy the German’s lines and that the seven-to-one superiority of numbers in the Somme region would also be great enough to secure victory. Haig’s plan to create a hole in the German lines using the artillery and then punching through with his cavalry also brought faith into this massive battle, alongside numerous mines such as Hawthorn Mine.

However, Haig did have many apprehensions about the Battle of the Somme. Firstly Haig had ordered a lot more of the heavy artillery, capable of destroying the deep German dug-outs, but he didn’t receive enough; and thus the German trenches would not be destroyed as much as he would have wanted. Also in its original structure the plan had been for a joint Anglo-French attack in which the French would play a major part on the Southern flank around the area of the River Somme itself. But, many French troops had been drafted from the Somme to give aid to their comrades at Verdun and the role of those left had to be very much reduced.There was meant to be a 50:50 proportion of French to British, but in reality it was much fewer.

Because, the French were trying to hold desperately onto the French city of Verdun and were close to collapse, a lot of pressure was put onto Haig and other Generals to distract German troops, in a vain attempt to try to keep France firmly in the war. Britain could not ignore their ally’s plea for help, as the French would be forced to surrender if there was no distraction. Consequently, if France withdrew from the First World War, then Britain would have to follow suit because the Germans would greatly outnumber them. It appeared that the fate of the war rested on this offensive.

Politicians in England, especially Lloyd George who would later become Prime Minister, were forcing Haig to launch the attack prematurely in order to help the French. These factors, combined with the urge from the general public to end the war quickly, forced Haig to reluctantly bring forward to the date of the attack from August to June, therefore planning and preparation had to be reduced and risks taken, even though Haig was reluctant.

Furthermore there was a grave risk that the Russians would soon withdraw from the First World War due to the inevitable Russian Revolution in 1917, which was being signified by increasing unrest and enthusiasm for the abdication of Tsar Nicholas II. If Russia withdrew from this war, then the Allies would be left fighting on one front, making victory even less likely. Consequently, there was a stronger urge to launch the Battle of the Somme to try to keep the two-front status, therefore diverting German troops from other locations to the Somme region.

Ultimately, Haig hoped that the Battle of the Somme would be able to break the stalemate on the Western Front, distract German forces from Verdun and gain victory. However, Haig was being put under increasing pressure by the general public and politicians to launch the offensive earlier rather than later, leaving the attack ill-prepared and Haig reluctant to fight.