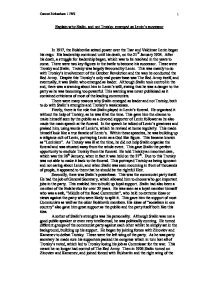 Explain why Stalin, and not Trotsky, emerged as Lenin's successor

Explain why Stalin, and not Trotsky, emerged as Lenin's successor In 1917, the Bolsheviks seized power over the Tsar and Valdimar Lenin began his reign. His leadership continued until his death, on the 21st January 1924. After his death, a struggle for leadership began, which was to be resolved in the years to come. There were two key figures in the battle to become his successor. These were Trotsky and Stalin. Trotsky was largely favoured by Lenin. This was mainly to do with Trotsky's involvement of the October Revolution and the way he conducted the Red Army. Despite this Trotsky's only real power base was The Red Army itself, and eventually, it was Stalin who emerged as leader. Although Stalin took control in the end, there was a warning about him in Lenin's will, stating that he was a danger to the party as he was becoming too powerful. This warning was never publicised as it contained criticisms of most of the leading communists. There were many reasons why Stalin emerged as leader and not Trotsky, both to do with Stalin's strengths and Trotsky's weaknesses. Firstly, there is the role that Stalin played in Lenin's funeral. ...read more.

Yet again the congress was packed by Stalin's supporters and he easily won the votes. Zinoviev and Kamenev became jobless. He also this he used propaganda to popularize himself with the people of Russia. Along with this he used vicious, yet clever tactics, such as threatening employees and work associates with demotions or the sack if they would not carry out his work and vote for him. These points allowed Stalin to build up a large fan base without becoming unpopular with certain parties and people which, eventually, lead to him emerging as the leader of Russia. The final point of Stalin's strengths is his idea of "socialism in one county". This idea consisted of creating a communists state in the USSR without the help of outsiders and foreigners. This was very popular amongst the Russian citizens as they had just been at war and was tired of fighting. They hoped of consolidating their country and making a better Russia. These ideas were also strengthened when several proletarian revolutions, in countries like Germany and hungry, failed and put an end to the permanent revolution ideas. This helped Stalin overcome Trotsky as it gave him increased support and votes from the Russian citizens. ...read more.

He had a very personal relationship with his troops and understood the importance of visiting them. He was a great organiser and leader for them. However, despite this role in the army, he played little role in the party itself and most of the other members disliked Trotsky and his policies. Even Lenin himself questioned Trotsky's political judgement. This meant he had little support from the party and had to rely on mainly on the Red Army for support. Overall, I feel that Stalin emerged as leader because of his own strengths. He gave himself a head start over Trotsky in the race to become leader when he organised Lenin's funeral, and with his powerbase being the communist party itself, he had plenty of support and votes to win the position of leader. The fact that his idea of "Socialism in One Country" was preferred by the Russian citizens to Trotsky's "Permanent Revolution" gave Stalin extra support and also made Trotsky less popular with the people and parties. Trotsky's downfall can be blamed partly towards his weaknesses though as he made himself unpopular by not having time for those he considered less intelligent than himself. His powerbase was the Red Army which gave him little support in votes. These are the ain reasons of Trotsky's downfall and Stalin emerging as supreme leader. 1 Connor Richardson 11WS ...read more.