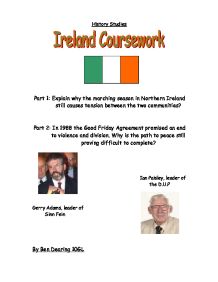 Explain why the marching season in Northern Ireland still causes tension between the two communities? In 1988 the Good Friday Agreement promised an end to violence and division. Why is the path to peace still proving difficult to complete?

History Studies Part 1: Explain why the marching season in Northern Ireland still causes tension between the two communities? Part 2: In 1988 the Good Friday Agreement promised an end to violence and division. Why is the path to peace still proving difficult to complete? Ian Paisley, leader of the D.U.P Gerry Adams, leader of Sinn Fein By Ben Dearing 10GL Part 1: Explain why the marching season in Northern Ireland still causes tension between the two communities The marching season is where the Protestants of Ireland celebrate William of Orange's victory in the Battle of the Boyne by marching through Northern Ireland via some Catholic areas. These marches take place in July of every year and are usually peaceful. But sometimes they are violent. There are a number of possible reasons why there is a tension between the two communities over the marches, for example land, religion, politics, history and social division. During the 16th century, James 1st and England started to take a closer interest in Ireland. They feared Ireland because they thought that they could become a threat to their own power. This was mainly because of the difference in religion. England was mainly Protestant whereas Ireland was mainly Catholic. This was worrying to the English rulers. So instead of sending in soldiers to defeat the Irish before a war had even started and destroying Ireland, he decided to send English Protestants over to Ireland. Land was still the main source of power, so by sending people over who were loyal to the English crown, he was gaining more power. The lands in which he sent his people over to were owned by Catholics. This process was called the 'Ulster plantations'. This was fine until 1640. But in 1641 there was a big rebellion by Catholics against English rule. It originally broke out in Ulster but quickly spread to other parts of Ireland. ...read more.

This turned Tone from a reformer to a Revolutionary. He originally went to America but later moved to France. Here he was going to try and win support for an Irish rebellion. He succeeded. Back in Ireland, the clampdown of the United Irishmen continued. And in 1798 when the British again turned their attentions to Ireland, the country exploded into rebellion. The British though were too powerful and by June, the main part of the rebellion had collapsed. Wolfe Tone was caught and was sentenced to death. He killed himself in jail. These events could be seen as one of the main contributors to why there is still tension during the marches. This is because the attitudes of a lot of Protestants changed dramatically after the rebellion. Because of the mass massacres that took place all over Ireland, it convinced a lot of Protestants that their future now laid in loyalty to a Protestant United Kingdom. From 1845 to 1851, Ireland went through a state of depression. Those years were known as The Irish Famine. A disease called blight ripped through the potatoes in large parts of Ireland leading to the crops not being edible. This was a catastrophe as potatoes were the main source of food in Ireland at this time so many families struggled to feed themselves. At this time most Irish Catholics were peasant tenants of protestant landlords. However much the protestant landlords were hated, they offered a job and a place to sleep leaving the Catholics no choice but to work for them. The Catholics grew potatoes for food and wheat for rent. But when this potato blight killed of the potatoes, the Catholics were forced to eat the wheat. This was ok for a little bit but then because they were eating the wheat they had nothing to pay for the rent with. And the rules on failing to pay for rent was eviction, in other words chucking them out on the street. ...read more.

This process slowed down the peace process. However, things are looking positive. The IRA called a ceasefire in 1994, and despite the Omagh bombing in 1998; the level of violence has decreased. But how long will this last? In 1995, a joint Framework Document was made and within that, a part of it asked for all groups to have their weapons decommissioned. This included the IRA. But they refused to give up their weapons. This therefore meant that the peace process was held up. Sinn Fein agreed to this, in principle, but the IRA flatly refused. Because of this, Unionists won't hand their weapons in. This is because they are scared of being attacked by the IRA without weapons. So this again leads to the two sets of groups being unable to trust each other further. And because of this, peace is not yet in sight. At the moment the future looks grim for Ireland. The Northern Ireland assembly that was made in the Good Friday Agreement is not doing very well. The parties involved in the assembly do not trust each other. The assembly has been suspended four times since the Good Friday Agreement was made and things don't look like they are getting better. The Protestant parties don' t trust Sinn Fein. They have accused them of allowing IRA members into Stormont to spy on proceedings. Sinn Fein categorically denies this, but the British Government acted quickly by dissolving the power sharing Northern Ireland Assembly. The Protestant parties say that they cannot trust Sinn Fein and they won't work with them until their weapons have been decommissioned. Direct rule from Westminster has been re-instated and power now lies again with the British Northern Ireland Secretary. The path to peace is still nowhere near completed. The reason I think for this are the above reasons but I think most importantly is trust, or the lack of it. None of the groups appear to be able to trust each other and unless something drastic happens, they are not going to be able to trust each other in the near future each other. ...read more.