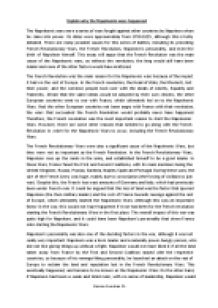 Explain Why The Napoleonic Wars Happened.

Although this was an important factor in the war, this would not have happened if it not had been for the French revolution starting the French Revolutionary Wars in the first place. The overall impact of this war was quite high for Napoleon, and it could have been Napoleon?s personality that drove France onto starting the Napoleonic Wars. Napoleon?s personality was also one of the deciding factors in the war, although it was not really very important. Napoleon was a born leader and a naturally power-hungry person, who did not like giving things up without a fight. Napoleon would not have liked it if all the land taken away from France by the First and Second Coalition stayed with the respective countries, so because of his revenge-liking personality, he launched an attack on the rest of Europe to reclaim the land and reputation lost in the French Revolutionary Wars. This eventually happened, and became to be known as the Napoleonic Wars. On the other hand, if Napoleon had been a weak and timid ruler, with no sense of leadership, Napoleon would have let the other countries and empires keep their new-found territories (which ultimately happened when Napoleon died), and there would have been no Napoleonic War. ...read more.

would not have been possible. The coup d’état also played an integral part in the causes of the war. The French Government was overthrown by in 1799, and it could have been this that spurred France and Napoleon to war. Under the old regime, they would not have had enough confidence to go to war against the other European enemies. Without the overthrow of the French Government, there would have been nobody to make bold decisions. Although this is a reason for the Napoleonic Wars, it is not very significant, as Napoleon was already Head of the French Army by the time the coup d’état happened, and the only change is the overthrow did not happen may have been the name of the War. In conclusion, the French Revolution was the main reason behind the Napoleonic Wars, as this set most of the other European countries against France and its leaders. However, a war could not have been possible if it had not been for all the other factors, including, the Revolutionary Wars, Napoleon’s personality, the birth of Napoleon himself and the coup d’état. All of these factors contributed to the start of the Napoleonic War, but the French Revolution was the most important reason of all. Karnan Sembian 9L ...read more.