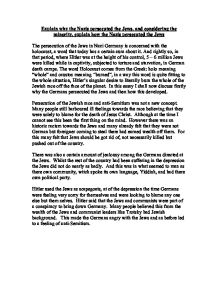 Explain why the Nazis persecuted the Jews, and considering the minority, explain how the Nazis persecuted the Jews The persecution of the Jews in Nazi Germany is concerned with the holocaust, a word that today has a certain aura about it. And rightly so, in that period, where Hitler was at the height of his control, 5 - 6 million Jews were killed while in captivity, subjected to torture and starvation, in German death camps. The word Holocaust comes from the Greek: holo meaning "whole" and caustos meaning "burned", in a way this word is quite fitting to the whole situation, Hitler's singular desire to literally burn the whole of the Jewish race off the face of the planet. In this essay I shall now discuss firstly why the Germans persecuted the Jews and then how this developed. Persecution of the Jewish race and anti-Semitism was not a new concept. Many people still harboured ill feelings towards the race believing that they were solely to blame for the death of Jesus Christ. ...read more.

It was used with extreme success to make the Germans jealous, cross and anti-Semitist. This all the Nazis the base they needed; this is the support of the people who due to existing and new anti-Semitism were ready to accept a basic persecution of the Jews. However the Nazis could not dive strait into the mass murder of the Jewish race. I will now explain how the persecution of the Jews developed. On 1 April 1933 the Nazis started to boycott the Jewish stores, this was organised by the SA, often Storm troopers would stand outside and stop people from been able to go in. At the same time Jews were banned from having jobs in the civil service. The Nazis also started to try and take out of Jews from economic life. This was known as the 'aryanization of businesses'. The people supported this and more joined the anti-Semite movement in fear of been seen as anti German. On 9 November a German official was shot in Paris a young Jew was blamed for this. ...read more.

In 1942 the Wannsee conference was held where over a buffet lunch they came to a 'final solution' to the 'Jewish problem'. This final solution was the mass extermination of Jews at newly built death camps. These could 'process' 2000 Jews at a time by leading them into what they thought were showers but really released a deadly gas. All 2000 would be dead within 3 minutes. This was the final part of the persecution of the Jews and without the end of the war they would have killed all of the Jews in the areas they controlled without hesitation. The persecution of the Jews was simply down an historic prejudice and jealousy coupled with the want to blame someone else for their problems. This was used to start a boycott against Jewish stores. And from here it moved up to the death camps witch killed around 3 million Jews. They did this gradually so as it could be accepted by the people and the most horrific stages in the persecution such as death camps and the Ghettos were hidden from the public. They did this highly effectively and with disgusting effects from little more than jealousy. ...read more.