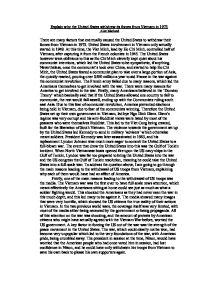 Explain why the United States withdrew its forces from Vietnam in 1973 Alex Macleod There are many factors that eventually caused the United States to withdraw their forces from Vietnam in 1973. United States involvement in Vietnam only actually started in 1949. At this time, the Viet Minh, lead by Ho Chi Minh, controlled half of Vietnam, after capturing it from the French colonists in 1945. The United States however were oblivious to this as Ho Chi Minh cleverly kept quiet about his communist intentions, which led the United States to be sympathetic, if anything. Nevertheless, once the communist's took over China, and started to help Ho Chi Minh, the United States feared a communist plan to take over a large portion of Asia, the quickly reacted, pouring over $500 million a year to aid France in the war against the communist revolution. The French army failed due to many reasons, which led the Americans themselves to get involved with the war. There were many reasons for America to get involved in the war. Firstly, many Americans believed in the 'Domino Theory' which basically said that if the United States allowed one country to fall to communist, the rest would fall aswell, ending up with the Communists ruling south east Asia. Due to this fear of communist revolution, America prevented elections being held in Vietnam, due to fear of the communists winning. ...read more.

All of these reasons as to why the US tactics were infact so poor only lead to more casualties, and this then indirectly affected public opinion of the war, who hated seeing their own people die. Nevertheless, one of the biggest reasons explaining why the US troops were withdrawn from Vietnam would be Morale. The communist forces opposing the US army were much more committed to their cause and they fought with a much greater desire to win. The allies of the American army, the South Vietnamese were not able to match the Viet Cong in either fighting ability or determination. Although the Americans could arguably compete with the Viet Cong's fighting ability, they definitely did not have any commitment and had no belief in their cause. Many of the US troops had abused the easily available hard drugs from neighbouring Laos and Cambodia. A later estimate put use of heroin at 30% between US soldiers, which again lead to depression and inferior fighting abilities. News of the growing opposition to the war from US citizens would have reached the soldier and only lowered their morale. As the old saying goes, it is not the dog in the fight, but the fight in the dog, and the Viet Cong certainly had more fight, irrelevant of the fact they were warring against arguably the greatest military power in the world. ...read more.

The main reason they came to war was the public support of America to prevent the spread of communism, and when the public support diminished surely the will to keep on fighting would have gone. In my eyes, the United States should have withdrawn far before when they actually did. The only viable reason I can see why they stayed would be that they believed they could salvage something from the war; otherwise all of the effort put in previously would have been wasted. But what did the United States achieve in the war against Vietnam? They went in wishing to stop the spread of communism, but infact the communist spread got bigger, as south Vietnam fell 2 years after the end of the war. Who is to say that the spread of communism wouldn't have stopped as it did at South Vietnam, without all the death's and casualties. Personally I believe that the only reason that the United States pulled out was for their own pride. If they pulled out in 1973, they could still say that they didn't lose to the communists, without further damaging their reputation as the world greatest power, and also without further damaging the negative reaction to the war occurring within America itself. In my eyes, it was only America's arrogance and their wish to keep their famed military prowess which was the reason why they didn't withdraw their troops earlier which ultimately cause more lives. ...read more.