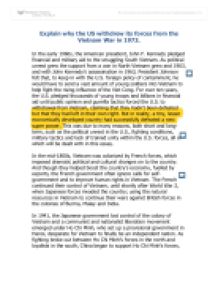 Explain why the US withdrew its forces from the Vietnam War in 1973. In the early 1960s, the American president, John F. Kennedy pledged financial and military aid to the struggling South Vietnam. As political unrest grew the support from a war in North Vietnam grew and 1963, and with John Kennedy's assassination in 1963, President Johnson felt that, to keep in with the U.S. foreign policy of containment, he would have to send a vast amount of young soldiers into Vietnam to help fight the rising influence of the Viet Cong. For over ten years, the U.S. pledged thousands of young troops and billions in financial aid until public opinion and guerilla tactics forced the U.S. to withdrawal from Vietnam, claiming that they hadn't been defeated but that they had left in their own right. But in reality, a tiny, lesser economically developed country had successfully defeated a new super power. This was due to many reasons, both short and long-term, such as the political unrest in the U.S., fighting conditions, military tactics and lack of trained unity within the U.S. forces, all of which will be dealt with in this essay. ...read more.

Both sides had seen the conflict has a symbolic reference to the two political idealogies and China and Russia were desperate to fight off the US's forces, and to weaken the general public beliefs in containment. Another issue the US had in Vietnam was that they didn't know who they could trust; they could search entire villages for Viet Cong, find none, and 'you could go throught that village later and get shot at by a sniper'. In Vietnam, the majority of the population lived in tiny villages scattered around the jungle, and because of the US's continuous napalm attacks on their vegetation, these villagers tended to side with the Viet Cong forces. The NLF had managed to win the hearts and minds of the Vietnamese people, in both the North and the South, whereas the Americans seemed like a threat to their culture and their land, dropping napalm with no warning to the public. And napalm did not only kill off vegetation, it also caused death by aphixiation, which means to slowly suffocate to death from lack of oxygen. During these attacks, you could not choose who was effected by the napalm, and the areas were bombs were dropped held just as many innocent civillians as they did Viet Cong, innocent civillains died during these attacks, which only helped to increase the resentment seen towards the Americans. ...read more.

From Colonel Oran K. They proceeded to cordon off the village and systematically kill every Vietnamese person within the hamlet, this included women and children. This event proved to be a turning point in the war and helped to start the American Peace movement, this movement included students, teachers, journalists and regular citizens. In August 1974, after the repetitive embarssment of the Watergate scandals, Richard Nixon was forced to resign as President of the United States of America, leaving his Vice-President Gerlad Ford to suceed him. Fords reluctance to continue supporting Vietnam lead to him stop all financial aid to Vietnam in December of the same year. This lack of financial and public support quickly lead to the Fall of Saigon and a hasty tactical retreat of the US troops. On April 30 1974, American helicopters evacuated South Vietnamese, U.S., and foreign nationals from various parts of the city and from the U.S. embassy compound, Operation Frequent Wind is arguably the biggest helicopter rescue in history, as Viet Cong troops stormed through the city towards the Presidential Palace in Saigon, eager to raise the flag and signal the end of the war. ?? ?? ?? ?? Jenny Stalker ...read more.

This is a very well written and detailed response that demonstrates excellent understanding of the key reasons for US withdrawal, with clear links to the question throughout. At times, the counterargument could have been considered more thoroughly and lengthily narrative could have been cut to make the response more concise. The lack of a conclusion is a significant weakness. 4 out of stars.