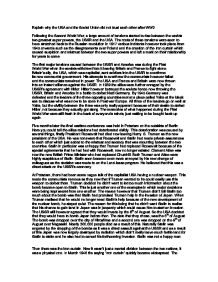 Explain why the USA and the Soviet Union did not trust each other after WW2 Following the Second World War, a large amount of tensions started to rise between the worlds two greatest super powers, the USSR and the USA. The roots of these tensions were seen to have stretched back to the Russian revolution in 1917 various incidents however took place from 1945 onwards such as the disagreements over Poland and the creation of the Iron curtain which caused suspicion and mistrust between the two super powers and left a mark on their relationship for years to come. The first major tensions caused between the USSR and America was during the First World War when the soviets withdrew from it leaving Britain and France to fight alone. Britain's ally, the USA, which was capitalist, sent soldiers into the USSR to overthrow its new communist government. His attempts to overthrow the communists however failed and the communists remained in power. The USA and France and Britain were now thrown into an instant alliance against the USSR. In 1939 the allies were further enraged by the USSR's agreement with Hitler. Hitler however betrayed the soviets hence now throwing the USSR, Britain and America in a battle to defeat Nazi Germany. By 1945 Germany was defeated and the leaders of the three opposing countries met at a place called Yalta at the black sea to discuss what was now to be done in Post war Europe. ...read more.

The communist soviets took complete control of all the countries on the Eastern side if the 'curtain' and the capitalists took control of the west. They were now completely detached from one another. Tensions were high. In March 1946 Winston Churchill delivered those famous words on the now split throughout Europe. The communist countries in the east were to be known as the 'satellite states'. One of these satellite states that caused a huge amount of exasperation was Poland. Stalin decided to set up a new communist committee in Poland called the Lublin committee. Britain and the USA agreed to recognise this new 'committee' on the condition that Stalin would hold free elections at a later date. They also wanted Key members of the exiled Polish government to have places in the Lublin committee. However... the old polish government remained dominated by the new communist one. Stalin also held rigged elections instead of the fair, free ones that had he agreed he was going to hold. Stalin had hence broken all the agreements over Poland much to the dismay of the USA and Britain. What Stalin was doing in Eastern Europe left him in Jeopardy from and attack by the west. The USA were becoming increasingly wary of Stalin and wanted to know what was going on behind the curtain. The information they were looking for came in the reply of the Long Telegram. ...read more.

The West were enjoying rubbing it in Stalin's face as there was nothing that Stalin could do to stop it. He had no choice than to call off the blockade. So it's clear that things had always been tense between the USA and the USSR. You can tell that the USA couldn't easily forgive and forget what happened in WW1 as easily as it they hoped they could. The events which happened during the French revolution and the First World War were clean in everyone's mind. The only reason the East and the West really became friends was in a unity to defeat Hitler. The main clash between the two however, is the fact that the West was capitalist, and the East was communist. That fact was never going to change so there was always going to be arguments between both their supporting views. After WW2 both found it impossible to trust each other again. Even today those tensions are still rife. Recently there have been conflicts in the small country of Georgia as the USA now has a major strategic interest in the country, having invested heavily in an oil pipeline and gaining more economic power. The Russians are seeing this as a major threat as it is part of the Soviet Union. This situation is just like it was during the cold war period when both superpowers were still arguing over land and power. Will it ever stop? ...read more.