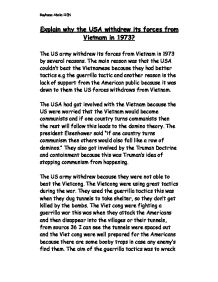 Explain why the USA withdrew its forces from Vietnam in 1973

Explain why the USA withdrew its forces from Vietnam in 1973? The US army withdrew its forces from Vietnam in 1973 by several reasons. The main reason was that the USA couldn't beat the Vietnamese because they had better tactics e.g the guerrilla tactic and another reason is the lack of support from the American public because it was down to them the US forces withdraws from Vietnam. The USA had got involved with the Vietnam because the US were worried that the Vietnam would become communists and if one country turns communists then the rest will follow this leads to the domino theory. The president Eisenhower said "if one country turns communism then others would also fall like a row of dominos." They also got involved by the Truman Doctrine and containment because this was Truman's idea of stopping communism from happening. The US army withdrew because they were not able to beat the Vietcong. The Vietcong were using great tactics during the war. They used the guerrilla tactics this was when they dug tunnels to take shelter, so they don't get killed by the bombs. The Viet cong were fighting a guerrilla war this was when they attack the Americans and then disappear into the villages or their tunnels, from source 36 I can see the tunnels were spaced out and the Viet cong were well prepared for the Americans because there are some booby traps in case any enemy's find them. ...read more.

The cost of the war made them pull out of the war because it was costing too much. It cost $20 billion a year and they were fighting for about 8 years so that's why they withdrew because of how much it was costing. By 1968 the war was costing 66 million dollars a day. This had made the president increase the income taxes and also he cut back on his programme to deal with poverty. This had made them withdrew from the war because they were spending a lot of money due to the fact that this contrasted with the amount of lives that were being taken. By the end of the war the USA suffered over 200,000 dead and wounded. The mass media was a really good example of why they withdrew because it was down to them and the American public because from this the USA was losing their support for the war. The Viet Cong could not get rid of the Americans from Vietnam but the American public could. There was a magazine called the Life Magazine and this showed photographs of 242 US soldiers killed in the Vietnam War, this had shown people killed in one week. Every night on coloured television people saw pictures of dead and wounded marines. ...read more.

Not only students protested in October 1969 about one million Americans joined a nationwide anti war protest. Not all Americans supported the peace movement but it was obvious that the USA was not united in support of the Vietnam War. Mohammed Ali was one of the many protested against the war, there were several reasons why the ethnic minorities felt strongly about Vietnam. The main reason was the expense of the war. By 1968 the Vietnam War was costing 66 million dollars per day this links up with how many people were killed during the war. The protest movements brought together all sorts of reasons for wanting the USA to get out of Vietnam. I think that all these reasons had made the USA withdraw from Vietnam but the main reason I think was the lack of support from the American public and this links up with the media and protest movements because they held demonstrations for USA to pull out of the war. The public made them leave because they were shown pictures of what was happening in Vietnam and this had scared the American public, and some people were losing their own family in the war. They probably felt guilty because the American troop's, were killing innocent people for no apparent reason. That's why this links up with the protest movements because they both made the US government to change their minds about the war. Rayhana Abdin 11EN ...read more.